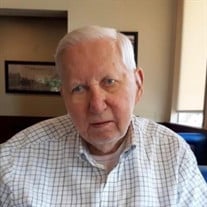 William Francis Wisz, age 90, of Middleville, passed away peacefully on Tuesday August 11, 2020. William (Bill) was preceded in death by his mother and father, John and Martha (Grochowalski) Wisz, sister, Barbara, brothers James, John, Joseph and Thomas, and nephew Jack Wisz. Surviving are his beloved wife of 63 years, Janet Lee (Penland) Wisz, children Susan (James) Gietzen, Cynthia (Greg) Kneibel, Sharon (Michael) Gill, William C. Wisz, Micheal Wisz, and David (Lisa) Wisz. Also surviving are his dear brother, Robert W. Wisz, 17 grandchildren, 13 great grandchildren (with one more on the way) and many nieces and nephews. William was a proud 1948 graduate and Homecoming King of Catholic Central High School. Never one to shy away from adventure, following graduation he took off to the Territory of Alaska on the Alaskan Highway. Upon his return to the States, he joined the United States Air Force to contribute to the Korean War efforts as a B25 Flight Engineer. After completing his service, he attended Aquinas College and the University of Michigan. He began his career as a manufacturing engineer at Lear Sigler in Grand Rapids. At Lear he had the honor of manufacturing technology that guided the Apollo 11 mission to the moon. When Bill learned that one of his engineering projects was to be left on the moon, he engraved his name on the interior so that his name would live on outside the planet earth. After the space program slowed down Bill moved on to Steelcase, from which he retired over 30 years ago. During the early 1970’s Bill and his family moved from Grand Rapids to Alto, where he took up farming as a hobby. In his retirement, Bill was active in rural land development, having created two subdivisions in the Caledonia, Middleville area. Until the end, Bill enjoyed being a gracious host to large family gatherings as he always felt his biggest accomplishment in life was the family he and Janet created together. Visitation will be Thursday August 13th from 2:00 pm – 4:00 pm and 6:00 pm – 9:00 pm at the Arsulowicz Brothers East Mortuary 937 Michigan St. NE. A Mass of Christian burial will be celebrated Friday August 14th at 11:00 am at Holy Family Catholic Church, Caledonia with his nephew, Father James Wyse, presiding. Interment will follow at Resurrection Cemetery. Memorial contributions may be made to Paralyzed Veterans of America (www.pva.org) or West Catholic High School.

The family of Mr. William F. Wisz created this Life Tributes page to make it easy to share your memories.

Send flowers to the Wisz family.