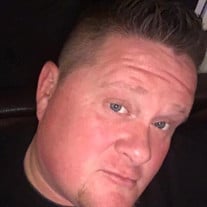 Timothy Wooten, 43, of Grand Rapids, MI passed away peacefully in the early morning hours of July 29, 2020 surrounded by love from his family: His sons, Devin, Drake and Payton Wooten (Grand Rapids, MI & Chicago, IL), his sisters Lisa Kurtzman (Murrells Inlet, South Carolina) and his sister Mary (Craig) Ritchie (Ashton, IL), his cousins who were like his brothers, Nate (Lori) and Adam Wooten (Rochelle, IL), and his mother and step-father, Vickie & Joe Nelson (Ashton, IL). Tim was born in Rochelle, IL to Michael Wooten and Vickie Nelson on October 14, 1976. He was raised by his paternal grandparents, Gene and Doris Binger. He attended Rochelle Township High School and spent his life working as Loss Prevention Manager for a variety of industries in the Illinois-Iowa Quad Cities and Grand Rapids, MI area. Tim always enjoyed the finer things in life like five-star hotels and traveling to visit his sister to soak up the sun in South Carolina. He was a die-hard Chicago Bears, Chicago White Sox, and Notre Dame “Fighting Irish” fan and watched the games religiously. The man knew how to make a meal that would feed an army of family and friends. But the thing he was most proud of were his boys. He leaves behind his love of cooking through his son, Devin whose culinary career was inspired by his Pop’s dream of becoming a chef. His sense of adventure, street smarts and lively storytelling will live on through his son, Drake. And Tim’s soft heart will continue to beat on through his son, Payton (named after his favorite Chicago Bear, Walter Payton). Tim was welcomed into his next chapter in joyful reunion with his late father, Michael Wooten, Doris and Gene Binger, and friends who passed before him. He will continue to be celebrated by, his nieces Megan Whaley (great niece Haven Marie) and Lily Kurzman, and his nephew Tanner Altman ((Murrells Inlet, South Carolina), and many extended family members. Due to COVID-19 safety precautions, two celebrations of life will be held in the fall at the beach in Grand Haven, MI and in Rochelle, IL. In lieu of flowers, the family appreciates continued prayers of strength during this time and cards of condolences to be sent to his sons: Devin, Drake and Payton Wooten at 34 Luray Avenue NW, Grand Rapids, MI 49504. The family would also like to publicly thank Mercy Health Saint Mary’s in Grand Rapids, MI for their compassionate doctors, nurses and staff for their support during Tim’s final days.

The family of Timothy Wooten created this Life Tributes page to make it easy to share your memories.

Send flowers to the Wooten family.