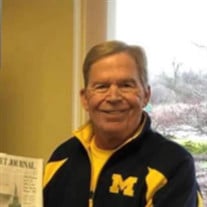 Theodore J. (Ted) Vogt, age 71, passed away Friday April 24, 2020. Ted was born to the late Theodore J. Vogt and Eileen (Rooney) Vogt and is survived by his sisters Mary (Petterson), Anne Vogt; his children Jesse (Sara) Bladey, Tracy (Darren) James, Suzanne Bladey, Nick Bladey, Stephanie (Roberto) Mata, Lily Vogt, Libby Vogt, Amelia Vogt, Jocelin Vogt; 19 grandchildren; his beloved Aunt, Val Rooney; and dozens of cousins with whom he remained close throughout his life. Ted was very proud of his big family, his German/Irish heritage and Westside upbringing. He was a faithful member of the Catholic Church and was proud of his time in the US Army where he spent two years in what he always referred to as “sunny Europe”. Ted had a zest for life, was fiercely tenacious and greeted each new day with enthusiasm. He was a loving father, enjoyed golf, was passionate about cars, politics, his vacation home in Traverse City, and the investment business where he enjoyed a successful, nearly 40 year, career. He will be greatly missed by his family, friends, and business partner of 33 years, Carol Dehen. Due to Covid 19 private family services will be held and a celebration of Ted’s life will be planned at a later date. Memorial contributions to West Catholic High School will be appreciated.

The family of Mr. Theodore "Ted" J Vogt created this Life Tributes page to make it easy to share your memories.

Send flowers to the Vogt family.