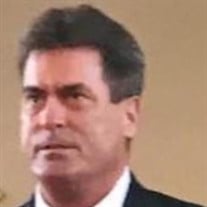 Theodore (Ted) Balczak passed on to be with our Heavenly Father on Sunday January 3rd 2021, from complications due to COVID19. Ted just celebrated his 60th birthday on 11/14/20. He attended grade school at St. Isidore’s, and graduated from Grand Rapids Central High. Ted continued his education and completed a BA from Phoenix University and an HVAC certification from GRCC this past March. Ted worked at Rowe AMI before moving to Dematic, then putting his HVAC degree to work at All Phase Services. Ted was a kind, fun loving guy. He enjoyed life and getting together with his big family and his many friends. He would always help others whenever he was asked. He was an avid runner finishing the River Bank Run 25K 15 times and many 5K races. He loved all kinds of dances including line dancing with his “Twisted Crew” dance group, and the Polka. He loved volunteering for many good causes including Pulaski Days Committees, American Legion Boat and Canoe Club Events, several golf outings and bus trips around West Michigan. Ted enjoyed participating in a variety of sports including Softball, golfing, bowling, hockey, and downhill skiing. He helped organize annual golf outings such as Little Hall Masters, Pulaski Days Golf Outing, and Tri-Club Challenge up north. Ted played percussion for the Polka band ” The Sonics” with his brother Ben for over 20 years. Their music entertained hundreds at several Polish Halls around the Grand Rapids area during the annual Pulaski Days celebration. They were surrounded by family and friends to hear them play. He was always a big kid at heart. He treated several of his nieces to annual trips to Cedar Point over the years. His favorite teams to root for were the Fighting Irish of Notre Dame, Detroit Red Wings, Lions and Tigers. Ted loved to travel to exotic places. When Ted was getting ready for a trip it was always a treat when he shared his video of “What’s In Ted’s Suitcase”. There was always a surprise item or two for every trip. He was preceded in death by his parents Gerald and Melissa. Ted came from a big family and is survived by Anthony (Shelley) Balczak from Grand Rapids, Coleen (Jack) Bent from Sand Lake, Chris (Tammi) Balczak from Grand Rapids, Kevin (Patty) Balczak from Alto, Ben (Sandy) Balczak from Greenville, Jerry (Donna) Balczak from Grand Rapids, several uncles, aunts, and numerous nieces, nephews, and cousins,. There will be a funeral Mass at St. Jude’s on Jan. 23rd, 2021 at 11 am located at 1120 4 Mile Rd NE Grand Rapids, MI 49505. A visitation is allowed starting at 10am at the church. Masks and social distancing will be required to attend. The church can only allow 25% capacity in compliance with current state of Michigan COVID19 orders.

Theodore (Ted) Balczak passed on to be with our Heavenly Father on Sunday January 3rd 2021, from complications due to COVID19. Ted just celebrated his 60th birthday on 11/14/20. He attended grade school at St. Isidore&#8217;s, and graduated... View Obituary & Service Information

The family of Theodore (Ted) Balczak created this Life Tributes page to make it easy to share your memories.

Theodore (Ted) Balczak passed on to be with our Heavenly Father...

Send flowers to the Balczak family.