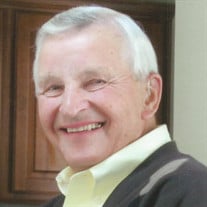 Mr. Thaddeus “Ted” E. Szotko, a U.S. Navy Veteran was born on December 30, 1933 and entered God's loving arms on Friday February 11, 2022. He was preceded in death by his loving bride of over 60 years Esther. Ted is survived by his cherished children, Gary (Mary) Szotko, Darleen (Kevin) Buitendyk, Janet Mohr, Roger (Laura) Szotko; grandchildren, Lauren (Scott) Sedgley, Alex Szotko, Ryan (Crystal) Buitendyk, Matthew Buitendyk, Luke Buitendyk, Lance Buitendyk, Mark Buitendyk, Casey Buitendyk, AJ Mohr, Brad Szotko, Megan Szotko, two great grandchildren, and several nieces and nephews, three brothers-in-law Richard Bilski, Larry (Diana) Bilski, and Herm (Regina) Bilski. Ted retired from the Grand Rapids Fire Department as Captain in 1994 after 35 years of service. He adored his grandchildren and loved attending their sporting events especially those of the West Catholic Falcons. He enjoyed spending family time up north at the cottage, often referred to as "Polish Paradise", especially during hunting, ice fishing and snowmobiling seasons. Ted was proud of his Polish heritage. He thoroughly enjoyed the many Polish festivals and events, sharing his special cherries, playing the spoons with countless Polka bands and serving as the 2002 Pulaski Days Co-Grand Marshall. His family and friends will always remember him for a contagious smile and his ability to create friendships with both young and old. Ted was strong in his Catholic faith being a member of Blessed Sacrament Church for 55 years. He will be missed by many. A Mass of Christian Burial will be celebrated Wednesday February 16 at 12:00 pm (Noon) at Blessed Sacrament Catholic Church, 2275 Diamond Ave NE where his family will receive visitors one half hour prior. (The Mass will be livestreamed via the funeral home website). Interment at Holy Cross Cemetery. His family will receive visitors on Tuesday February 15 from 2:00 pm to 4:00 pm and 5:00 pm to 8:00 pm. at the Arsulowicz Brothers East Mortuary 937 Michigan St NE. A Rosary will be prayed at 7:00 pm on Tuesday at the funeral home. Memorial Donations in Ted’s memory can be made to Emmanuel Hospice or Gift of Life Michigan.

The family of Mr. Thaddeus "Ted" E. Szotko created this Life Tributes page to make it easy to share your memories.

Send flowers to the Szotko family.