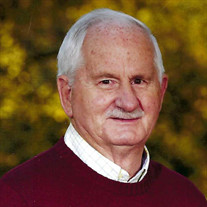 Ronald W. Edington age 80 of Grand Rapids passed away peacefully at his home surrounded by his family on Tuesday March 10, 2020. He will be deeply missed by his wife of 55 years Kathleen Edington (Novakoski); his children Mary (Mark) McKenzie, Margaret Tipton, Paul (Jodi) Edington, Michael (Laura) Edington, Anne (Gregory) Durkee, Matthew (Amy) Edington, Maureen (Dustin) Maupin; grandchildren Lesly (James) Purvis, Nicole Janes, Alexandria and Jackelyn McKenzie, Jacob Tipton, Maggie (Mike) Hostetler, Joe (fiancé Cameryn), Kellianne, William and Benjamin Edington, Logan Edington, Olivia and Sophia Durkee, Adelaide and Matthew Edington; great grandchildren Amarianna, Romani and James Jr. Purvis, Nolan Edington; brother Lawrence Edington; sister Jean Anderson; several nieces, nephews and friends. He was preceded in death by his parents Lawrence and Josephine Edington, brothers Harold and Clarence Edington, sister Joan (George) Droemer, sister in law Shirley Edington, granddaughter Kimberly Kelly Janes. Ron was a loving and devoted husband and a father of seven, grandfather to 16 and great grandfather to four, a life he was very proud of. He found great joy and happiness in watching all of his family grow. He came from a humble beginning and left a beautiful legacy. He was an honest man, full of integrity and possessed a willingness to help everyone he knew. Ron was a quiet man, but you always felt his abounding love every time you were around him. There wasn’t anything Ron couldn’t fix, or at least try. He enjoyed spending time “Up North” at the cabin he built with his good friend Bill Feutz. He would spend time hunting, fishing or listening to the Detroit Tigers on the radio. He enjoyed watching his family play at the lake during the day and taking everyone to look for deer in the evening. At the campfire at night, he was famous for singing Behind Those Swinging Doors. Ron was a veteran of the United States Marine Corps (1958 – 1962), and retired from the East Grand Rapids Police Department in 1996 after 31 years of service. Although retired, he never stopped working. He spent time working at Rylees Ace hardware, and also with his close friend, Don Shuker, doing home repairs/remodeling. His passion for wood working and remodeling was evident in the home he shared with his family for over 50 years. Ron was an active member of the American Legion Furniture City Post 258 serving as the 2nd Vice Commander from 2003-2004 as well as the 1st Vice Commander from 2004-2005. Giving back to the community was an important part of Ron and Kathy’s life. He was a lifelong Catholic and always had a strong devotion to God. Ron and Kathy were long time members at St. Thomas the Apostle Parish and most recently members at St. Alphonsus Parish. Through all the ups and downs in life, their steadfast commitment to their faith carried them through and was the foundation of their marriage. The Mass of Christian burial will be celebrated Monday March 16 at 11:00 AM at St. Alphonsus Church where he will lie in repose one hour before the Mass. His family will receive visitors Sunday March 15, from 4:00 to 8:00 PM at the Arsulowicz Brothers East Mortuary, 937 Michigan St NE. Memorial contributions may be made to the Lemmen-Holton Cancer Center or the Grand Rapids Home for Veterans.

Ronald W. Edington age 80 of Grand Rapids passed away peacefully at his home surrounded by his family on Tuesday March 10, 2020. He will be deeply missed by his wife of 55 years Kathleen Edington (Novakoski); his children Mary (Mark) McKenzie,... View Obituary & Service Information

The family of Mr. Ronald W. Edington created this Life Tributes page to make it easy to share your memories.

Send flowers to the Edington family.