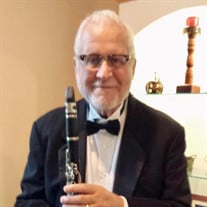 Robert William Nelson was born in September of 1943 in Naperville Illinois. He was raised by J. Vernon and Violet Nelson and had a wonderful childhood with his sister, Karel. He graduated from Naperville Central High School – where he said his biggest challenge was that his father was a teacher and that he had to stay out of trouble! Bob graduated from North Central College in 1966 with a degree in Music and Secondary Education. Later, Bob obtained a Master’s Degree in Educational Administration from Western Michigan University. He was beloved as a teacher, coach and administrator – they called him “Mr. Sunshine.” He lovingly taught students in several high schools – choir, band, history. He ended his career as the Superintendent of Carson-City-Crystal Area Schools. Bob’s connection with his students and staff was remarkable as evidenced that many were still in contact with him. Bob’s varied interests allowed him to share his knowledge and passion to those outside education. He was not just a Civil War buff; he was an expert! Bob could tell you anything about the Civil War. He was actively involved in Civil War chat groups, led Facebook pages, wrote historical accounts for others to learn from and had an impressive collection of Civil War books and memorabilia. One of Bob’s proudest accomplishments is receiving the rank of Master Mason, the highest rank of the Freemasons, which is the oldest fraternal organization in the world. Bob also loved all animals – he especially had a soft spot for his cats; Eddie, Cocoa, Peanut and especially Waif, who he found rescued and nursed with a bottle back to health. After retirement, Bob led a life filled with all things he loved. He married Beth Jepson in October 2004 and they built a life based on family, humor and music. They enjoyed traveling, going to shows and concerts, cooking and just being with each other. He made sure everyone knew how much he adored and loved Beth. He also continued to work during retirement by teaching private music lessons and working at the Grand Rapids Public Museum – both allowed him to be the social, engaged teacher, mentor and historian he was. Bob also continued to be a part of multiple musical ensembles – playing the clarinet and bass – in classical orchestras, swing, jazz bands and even a hard rock band! He has three stepchildren: Todd, Terah and Jeremy. And he loved his grandchildren: Conor (19), Jadyn (18), Scarlett (5) Theodore (1) Lamer and Alex (16), Anna (14) and Claire (11) Bozarth. Bob loved to talk, fix things, and plan. But most important, he positively impacted the lives of those he met – his students, his colleagues, and his friends. But most of all, it is his family and Beth that he most enriched with his knowledge, music, kind heart, generous spirit and love. Services for Bob are to be determined, interment has taken place at North Shore Memory Garden, Coloma. In lieu of flowers, donations to the Humane Society will be appreciated.

Robert William Nelson was born in September of 1943 in Naperville Illinois. He was raised by J. Vernon and Violet Nelson and had a wonderful childhood with his sister, Karel. He graduated from Naperville Central High School &#8211; where... View Obituary & Service Information

The family of Robert William Nelson created this Life Tributes page to make it easy to share your memories.

Robert William Nelson was born in September of 1943 in Naperville...

Send flowers to the Nelson family.