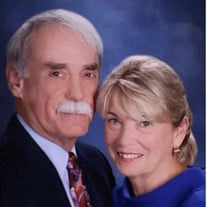 Robert F. Hiner, age 78 of Belmont, MI passed away peacefully at home Monday, November 16, 2020. He was preceded in death by his brother Richard G. Hiner (Mary); in-laws Loren and Maxine Toohey; nephew/niece Steven and Susan Hiner; great nephew Stefen Hiner. Surviving are his adoring wife of 42 years Sandy Hiner; son Sean Fey (Merri Jo), grandson Zach Fey; sister-in-laws Loreen Schnakenberg (Bob), Niece, Wendy Avery (Cary), great-nephew, Gage Avery; Teri Manry, niece Christina Manry; Carol Goehrs and her golden fur babies; Aunt Mary Jo Hamilton and family. Nieces, Susan Lamos (Rich) and Linda DeWitt; several great nieces and nephews. Bob will be especially missed by many lifelong friends, neighbors, golfers, coworkers, round table group, and acquaintances across the globe. Bob was born in Grand Rapids, MI in 1942 to Frank R. and Charlotte Hiner (Schultz). He graduated in 1960 from Godwin Heights High School. Bob joined the U.S. Navy and was deployed to Viet Nam as a hospital corpsman with the Marines. He returned to Viet Nam for a second tour serving as a Medical Evacuation pilot. Bob joined the Kent County Sheriff Department as an E-Unit officer (paramedic), He was assigned to the Investigative Division as an undercover Vice and Narcotics Detective and served as the Commanding Officer of a multi-jurisdictional Narcotics Enforcement Team before retiring in 1996. Bob was creative, loved practical jokes and was really funny. He was a great golfer achieving a career ‘hole in one’ and was known to throw a club on occasion! He liked to tinker, repair and build in his workshop. He liked anything techie. He took pictures. Many, many pictures! During Bob and Sandy’s retirement, they were devoted to serving at St. Isidore Church. They continued their lifetime love of golf and travel. Beginning with a 1991 religious pilgrimage to the village of Medjugorje in Bosnia, he and Sandy were led to many years of international humanitarian efforts being the hands and feet for peace during and beyond the war conflicts. Bob said, “it was the start of the change" in my life.” This most sacred place was a lifetime highlight for Sandy and Bob. Mass of Christian burial will be celebrated Monday, November 23 at 10:30 am at St. Isidore Catholic Church, 628 Diamond Ave NE Grand Rapids. He will repose one hour prior to the Mass at church. You are invited to read more about Bob’s life of service, and devotion to peace in his own words on Robert F. Hiner’s Tribute Page at www.arsulowiczbrothers.com. The family expresses a special thank you for care and support given by Kindred Hospice. In lieu of flowers, please consider memorial contributions to St. Isidore Catholic Church.

The family of Mr. Robert F. Hiner created this Life Tributes page to make it easy to share your memories.

Send flowers to the Hiner family.