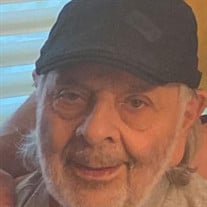 Robert (Butch) Paganelli born December 19,1942, retired from his earthly legacy on December 29,2021 to join his beloved parents who immigrated from Italy, Ceasar Paganelli and Josephine (Serafini) Paganelli, his brother Carl, sister Geraldine (Harris) Paganelli in eternal paradise. Surviving is his sister, Linda (Kozlowski), wife Concetta (Lauria) Paganelli and his children, Anne Marie (Annie) and partner Perry Smith, Lisa (Mayberry) Robert II (Bob), Nicholas (Nick) Paganelli, grandchildren, Marcello and Anabella (Annie), Stella and Anthony (Bob), to continue to honor him and spread his love everywhere! “It’s how you treat people that matters in life.” the value he instilled in his children. A lifelong Westsider, he attended Sacred Heart and Union High and attended college at Ferris State for automotive. In 1970, He bought his first Shell service station located at 608 28th. His work ethic was unmatched. In 1981, he opened another service station and offered many teenagers, including his beloved nephew’s their first jobs. His reputation as a master mechanic continued to flourish and he maintained both service stations for over 27 years.”Dial 1-800- CallButch!” His lifelong passion for sports led him to coaching his own Little league team, where he became President of Shawmut Hills LL. He was also a judge for the West Michigan Golden Gloves where he was inducted into the WMGG hall of fame. Our world is a better place because of Butch and he shall be remembered for so many qualities, his determination, loyalty, selflessness and infectious sense of humor. Stories shared of his life will continue on for years to come! A celebration of his life will be held on January 8, 2022 at 2PM at Kosciusko Hall, 935 Park SW 49504

The family of Robert (Butch) Paganelli created this Life Tributes page to make it easy to share your memories.

Send flowers to the Paganelli family.