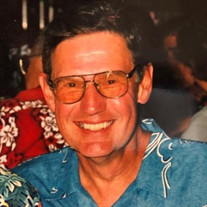 Bob Blanchard grew up on the West Side of Grand Rapids near John Ball and remained a proud West Sider for all of his life. He attended Sacred Heart Catholic school and Catholic Central High School. After high school he joined the Air Force and then attended Grand Rapids Junior College along with Aquinas College and earned a degree in history. He worked for the Department of Social Services for 29 years and was able to take early retirement at age 55. He married Norma Rupprecht in 1966 and together they had four children, Paula, Lisa, Glenn and Matthew, and three grandchildren; Claudia, Max, and Milena. Bob loved spending time with his kids and grandkids. His children looked forward to him coming home from work when he would play his Tea for the Tillerman album, play board games and read stories. Weekends meant trips to Lake Michigan, the zoo, the museum on Jefferson, sledding and ice skating at Richmond Park,spending time in nature, and going to the library. Reading, golfing, jogging, bicycling, hiking, watching Michigan State Spartans basketball games, and drinking cold beer were some his favorite things. He loved to read and always wanted share and discuss the books he read. His grandson Max knew that cold beer in the fridge meant that grandpa was coming over. He didn’t travel without a cooler of beer, and upon arriving to the destination he would say “first things first; let’s get that beer cold.” His son Glenn, when visiting home from Oregon each year, would take him to E Lansing to catch a Spartans basketball game. The first time he went to Breslin Center, he compared the experience to being in The Vatican, as though it were sacred ground. Even though there wasn’t a lot of money for extras, vacations were very important. He bought a second-hand pop up camper and summers were spent camping at Ludington State Park, the Tee Pee Campground in Mackinaw City and the U.P. In the summer of 1979, he hitched the camper to the Volare station wagon with no A/C and vinyl seats and drove to the family to Disney World. He managed to take the family to Disney three more times. Those road trips also meant stopping at highway roadside parks to eat warm bologna sandwiches at a picnic table near the pit toilets while he would proclaim “this is living, hey kids?” He wasn’t necessarily handy, and Christmas presents that were “some assembly required” meant the tools and swear words would soon be flying. Even though he was an introvert and often needed down time, he had many friends and enjoyed being around people and socializing. If you came over, he would always have a cold beer for you. He also enjoyed meeting up with friends at Vytautis Lithuanian hall where he was a member. After the kids were grown, Norma and he were able to drive out to the west coast to visit Glenn and Eunice, who had moved to Washington and Oregon, and continued their travels into California, The Grand Canyon, and “got their kicks on Route 66..” They were also able to travel to the Hawaiian islands, and to Europe, including Poland, Italy, Germany, and the Czech Republic. Norma said there was never a dull moment when traveling, and many times the trips with the family were akin to those of the National Lampoons Vacation movie. Bob was very involved in St Mary’s Parish, where he was a lector and Eucharistic Minister. He went to Mass every week, not because of obligation, but because it filled his spirit and valued the community. Bob had a lot of empathy for people and believed everyone deserved a second (or third, or fourth) chance without judgment. He was very involved in jail ministry, St. Mary’s Food Pantry, Kids Food Basket, and St Andrew’s Clothing Store. He didn’t push his kids to get the best grades or make a lot of money. He believed the purpose of life was to love and to be loved. He did and he was. Norma said that Bob would always say they should go out like Bonnie and Clyde, but sadly, Clyde went first.

Bob Blanchard grew up on the West Side of Grand Rapids near John Ball and remained a proud West Sider for all of his life. He attended Sacred Heart Catholic school and Catholic Central High School. After high school he joined the Air Force and... View Obituary & Service Information

The family of Robert L. Blanchard created this Life Tributes page to make it easy to share your memories.

Bob Blanchard grew up on the West Side of Grand Rapids near John...

Send flowers to the Blanchard family.