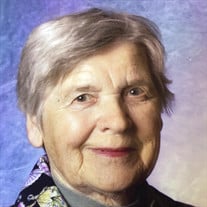 Pauline Dzenis Zadvinskis, age 94, of Grand Rapids, Michigan, died on Ash Wednesday, February 17, 2021. She was born in Preiļi, Latvia, on January 22, 1927, to Antons and Veronika Dzenis. Early in 1945, as Russian forces began taking over Latvia, Pauline, her parents, and older sister Antonija fled to Germany. Pauline and her family survived the Allied bombing of Dresden, Germany, in February of that year. Pauline met her husband Zigfrids Zadvinskis in the displaced persons (DP) camp in Fischbach, Germany, and they married on June 5, 1949. The couple enjoyed over 70 years of marriage. Pauline and her family arrived in Michigan in May of 1950. Despite her difficult wartime experiences in her teenage years, Pauline had begun a new life in America. She became a pillar of strength for family, friends, and admirers. Her demeanor was quiet and kind, guided by the power of strong faith. Pauline was active in the Latvian community of West Michigan and the Our Lady of Aglona parish in Grand Rapids. She served on the boards of the Grand Rapids Latvian Association and the American Latvian Catholic Association. Pauline enjoyed downhill skiing and traveled throughout the U.S. and Europe, including trips to Latvia. Pauline was a consummate hostess. She and Zigfrids opened their home to esteemed visitors from all over the world. Pauline planned and cooked yearly Thanksgiving dinners and ensured that the Zadvinskis family reunited every year at the dinner table. She was a talented homemaker, and she filled her home with warmth and love. For more than 50 years, Pauline was active in the Rivertown Artist Guild and the weekly Loretta Sailors Painting Classes, becoming an accomplished painter using oil and watercolors. Pauline focused on painting landscapes and flowers, and numerous venues throughout Grand Rapids have exhibited her artwork. Pottery and gardening were also among her favorite creative activities and interests. Pauline is preceded in death by her husband, Zigfrids Zadvinskis, M.D., parents Antons and Veronika Dzenis, and sister-in-law Nina Masilune of Riga, Latvia. She is survived by her sister Antonija Sinkevics (Grand Haven, Michigan), son John Zadvinskis J.D., son Edmund Zadvinskis (Grand Rapids, Michigan), son Peter (Linda) Zadvinskis, M.D., with Pauline’s granddaughters Madeline and Bonnie (Big Rapids, Michigan) and son David (Inga) Zadvinskis, M.D. (Dublin, Ohio). Pauline will be interred at Holy Cross Catholic Cemetery in Grand Rapids, Michigan. A celebration of life will occur at a later date. In lieu of flowers, please contribute to the the charity of your choice.

The family of Pauline Dzenis Zadvinskis created this Life Tributes page to make it easy to share your memories.

Send flowers to the Zadvinskis family.