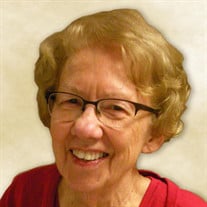 Konwinski, OP, Patrice of Grand Rapids (born Bernadette Konwinski) died on December 30, 2020. She was 83 years old and a Dominican Sister for 62 years. Sister Patrice earned a BA in Business Administration from Aquinas College and Master Degree in Business Administration from Xavier University, Cincinnati. Sister Patrice was assigned to Nazareth Hospital, Albuquerque as business manager and after earning her master’s degree became administrator of the Hospital. She assisted in the transfer to new owners and the new name, Vista Sandia Hospital. Sister Patrice was called to congregational leadership as Councilor for Temporalities and Gospel Values. It is a fitting name as she committed herself to both the financial concerns of the congregation and the resolve to create a climate of understanding and appreciation for the dignity of the individual - embracing the Gospel mandate to love one another. When her two terms as Councilor were completed, she was named Chancellor of the Diocese of Grand Rapids – one of a handful of women in the country to hold such a position. In this role she was the overseer of the diocesan budget, working closely with parishes on their budgets, personnel policies, and other matters. She held this position for nineteen years, serving under Bishops Joseph Breitenbeck, Robert Rose, Kevin Britt, and Walter Hurley. Lest one think she was all work and no play, she wanted us to remember that she loved to swim, hike, cross-country ski, practice yoga and have a “fun time.” One of her favorite sayings was: “Take time to laugh, it is the music of the soul.” From first to last, she lived a life of gratitude and joyful service, thankful for what was, and fully consenting to what is to come. May the angels lead her now into Paradise, where family, friends, and God, whom she served all of her life, await her coming with joy. Sr. Patrice is survived by her sisters Dorothy Royce and Margaret Konwinski, Grand Rapids and her brothers James Konwinski, Ted (Carol) Konwinski, Ben (Colleen) Konwinski, Grand Rapids and John (Denise) Konwinski, Ocala, FL, brother-in-law Jim Readwin; many friends and members of her Dominican Community. In an effort to protect our vulnerable population from the Covid-19 virus a private Funeral Mass will be celebrated at Dominican Chapel/Marywood on Monday, January 4. Burial will be at Resurrection Cemetery. Memorials in Sister Patrice Konwinski’s name may be made to the Grand Rapids Dominican Sisters. Arsulowicz Brothers

The family of Sr. Patrice Konwinski, OP created this Life Tributes page to make it easy to share your memories.