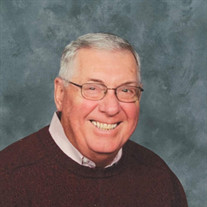 Norman David Pokora, the incredibly bright light born on September 26, 1939 went Home to join the Stars of Heaven on Wednesday, February 17, 2021. One of Norm’s favorite life sayings was, “Don’t worry about what you can’t control” and a fourth battle with cancer recently gave way to what could not be controlled. Norman is preceded in going Home by his parents Walter and Mary (Sremba) Pokora and his son, Stephen Pokora. Norm, also known as “Mr. Wonderful”, lived his entire life proudly as a Grand Rapidian. After graduating from Catholic Central HS in 1957, he immediately entered the workforce, successfully maintaining a career in the grocery industry, eventually retiring from Spartan Stores. With a desire to “make a little golf money” following retirement, Norm worked delivering mail at Spectrum Health/Butterworth Campus where he also delivered daily “Howdy’do!” greetings, Valentine’s and candy canes during the holiday’s. Norm was selfless in his giving and volunteerism as a bowling coach for almost 20 years and at the Michigan Special Olympics, for over 30 years. Norm acted on his passion of traveling by visiting many countries, (a favorite being WaWa Canada where fishing trip hauls with his son Steve were plentiful) territories, US States, Parks and Monuments. Norm often said, “There is so much to see right here at home and I’ve seen most of it!” Socially, Norm maintained friendships across many miles, bowling lanes, golf courses, baseball fields and also, as a member of the Fraternal Order of Elks. Norm’s lifelong love of Notre Dame Football was given a spotlight in the mid-90’s when he became a stadium usher and eventually, a Captain in Sections 105 and 106; a volunteer position that he held for over 15 years. Norman is survived by his best friend and wife of 60 years, Cecile (Lewakowski) Pokora, daughters Michelle (Emily) Pokora-Zyla and Elizabeth (Howard) Sadowsky; grandsons Christopher (Denise) and Nicholas Pokora, Walter and Ezra Sadowsky; also surviving are his sister, Rose Marie Frontuto; brother, Robert (Jackie) Pokora; goddaughter, Lynn Pokora; many nieces and a nephew. Also among this special group was a place in his heart for his “favorite niece” (it’s a Pokora thing). Norm was a tireless “Grandpaw” to Murphy Blue with whom he shared his lap and many naps. We were all blessed to be drawn into and embraced by Norm’s happiness and enthusiasm for life. His pure joy for each day was best expressed whenever he was asked the simple question, “How are you?”. His immediate, smile filled response of, “Super, fantastic, terrific, great, magnolious, superfluous and besides that I don’t feel too bad!’, remains as his positive legacy. Norm’s family extends gratitude to Dr. Alan Campbell and the caring staff of the Cancer and Hematology Center and Faith Hospice, with a special thanks to Andrea R.N. Visitation with the Family will take place at 10:00 AM for one hour prior to the Celebration of Life and Home Going, Thursday, February 25, 2021 at 11:00 AM at St. Alphonsus Parish, 224 Carrier Street NE, Grand Rapids, Michigan 49505. Masks required and social distancing Covid protocols will be in place. The service will be livestreamed on the St. Alphonsus Church website. In lieu of flowers, Norm requested donations be made to The St. Alphonsus Parish Foundation (above address). Online donations directed to the Foundation also accepted at www.stalphonsusgr.org

The family of Norman David Pokora created this Life Tributes page to make it easy to share your memories.

Send flowers to the Pokora family.