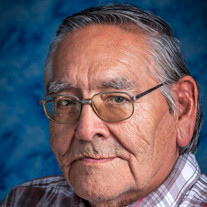 Norman Joseph “Joe” Leo, age 79, of Grand Rapids MI began his journey to his Creator on Friday October 23, 2020. A member of The Little Traverse Bay Bands of Odawa Indians, Joe was born in Harbor Springs, Michigan on May 12, 1941. He was the youngest boy of eight children born to Sampson and Cecilia Leo. He would share the same birthday as his mother; to which his father would jokingly tease her by saying, “Don’t say I never got you anything nice for your birthday!”. Early in Joe's life his family moved downstate to Grand Rapids. He attended both grade and middle school at St. Alphonsus in Grand Rapids. He graduated from Grand Rapids Catholic Central High School and served in the United States Army in the early 1960’s. After his father passed in 1965, he spent 27 years taking loving care of his mother until her passing in 1992. Joe worked at G & T Industries with his brother Sam before he decided to further his education. He enrolled at Grand Valley State University and earned his B.A. in Elementary Education. He went on to teach the 5th grade at Harrison Elementary School. A fellow teacher at Harrison Elementary remembers that he was “the favorite teacher in the building”. Joe inspired his students to do their best, and he would reward them in many different ways for their efforts. He was a firm believer in a College Education. It made him both happy and proud to hear about his many nieces, nephews, great-nieces and great-nephews efforts and accomplishments. After Joe stopped teaching he went on to work with Fran Compo at the office of The Grand River Band of Ottawa Indians. He helped her coordinate the annual Three Fires Pow Wow in Grand Rapids as well as other social events the tribe held. This was the last job he worked until he was able to retire. Joe was an avid sports lover his entire life. There were many a neighborhood softball game with his siblings and childhood friends growing up; these have become legendary stories for the Leo Family. He enjoyed bowling, golf, and playing softball on St. Al's 35 and older team as an adult. Not only did he play sports, but he coached them as well. He coached his sisters, nieces, cousins, and many friends on an all American Indian Softball Team back in the day. There are many fond memories of this time for those who were there playing or watching. He also coached basketball at Harrison Elementary while he taught there. Joe enjoyed watching sports too. He loved his Tiger Baseball, Lions Football, and University of Michigan Football and Basketball Teams. On game days he loved to blast his U of M Marching Band Album. One of his favorite places to catch a game was Woody's Press Box in Wyoming where he became a regular customer. A favorite pastime for Joe was playing bingo at many of the local parishes and halls. He made many good friends there over the years. He enjoyed taking the bus to area casinos to play bingo and the slot machines. His secret, he told us, was to play the max amount and don’t waste time playing one or two coins. Our Joe will be forever remembered as the best son, brother, father figure and uncle a family could be blessed with. He was a very generous, friendly, outgoing, loving soul who put out so much good in the world. Joe’s sense of humor combined with his smile and positive outlook made him very approachable and likeable. To know him was to love him. A testament to this is the number of friends he has held dear throughout his life. No matter where he went it seemed like he always knew someone. Joe was preceded in death by his parents Sampson and Cecilia Leo; siblings: Robert Leo, Gloria Chisholm, Richard L. Leo, Samuel J. Leo, Ruth Eagleman, Margaret Pontiac; nephew Richard Leo, niece Theresa Leo, and great-nephew Richard RedBow. Joe is survived by his sister Rosalee “Rose" Starchief; niece and “daughter" Karen (Pete) Schaab and their children: Celia, Jackson, Ava, and Sampson Joseph; Brother-in-law Johney Chisholm; close nieces: Sheree Gamble and Dawn Thorpe; the families of Leo, Chisholm, Eagleman and Pontiac plus several generations of nieces and nephews who will deeply miss his love and wisdom, and good friends Dave Wills and Sally McWilliams. A Memorial Mass will be celebrated Friday November 6, 2020 11:00 am at St. Alphonsus Church. Interment Holy Childhood of Jesus Cemetery Harbor Springs MI. His family will receive visitors Thursday from 5-8 pm at the Arsulowicz Brothers East Mortuary, 937 Michigan St NE and Friday from 10-11 am at church. The family would like to extend our gratitude to the entire staff at Bloom Credit Union on Plainfield Ave in Grand Rapids. The kindness and concern they have shown to Joe over the years means the world to us. Also, we want to thank the staff at Woody's Press Box in Wyoming for providing him with great service and making him feel welcome there.

The family of Norman Joseph "Joe" Leo created this Life Tributes page to make it easy to share your memories.

Send flowers to the Leo family.