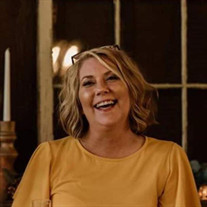 On Thursday, June 25th 2020, Mrs. Nicole Ruth Yankee, deeply loving and amazing wife and mother of one child, passed away at the age of 51. Nicole Yankee or Niki, as she liked to be known, was born on June 11th 1969 at Spectrum Health Blodgett... View Obituary & Service Information

The family of Mrs. Nicole "Niki" Yankee created this Life Tributes page to make it easy to share your memories.

Send flowers to the Yankee family.