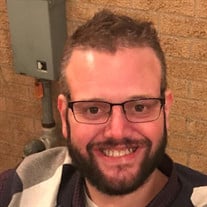 It is with profound sadness that we announce the passing of Nicolas “Nick” DeBartolo at the young age of only 37 years, but we rejoice in the fact that he has earned his bleacher seat in heaven. Nick is survived by his mother and stepfather Diane and Michael Keeling, his father Paul DeBartolo, his sister Natalie DeBartolo, brother Nathan DeBartolo, uncles, aunts, cousins and numerous friends. Nick passed after a very short non-Covid related illness and is now enjoying the promise of eternal life, leaving all of his worldly challenges well behind him. As a child, raising Nick was a breeze. One of the friendliest little fellas you would ever meet. Teen years brought teen challenges, but certainly nothing out of the ordinary that would cause a parent unusual concern. Nick started at Kenowa Hills High School System, and when we moved, he completed his education at East Kentwood High School. He gave college a bit of a run, but after only a semester it was obvious that the college life wasn’t for him and he entered the real estate business through DeBartolo Realty under the strict tutelage of his grandmother Alice DeBartolo. Only Nick could tell you how many times that his grandmother fired, only to hire him back the next day. His Grandmother Alice was his mentor and meant the world to him. When his grandmother passed roughly 10 years later, his Uncle Tony became his new mentor, and they worked together daily until the time of Nick’s passing. Tony and Nicolas were nearly inseparable with Nicolas handling the majority of Tony’s processing of his sales and listings. People that knew Nick would remember him as a kind and caring soul that had so much care and compassion for others. I never heard him say a bad word about another person and he had tremendous empathy towards the less fortunate. As I became involved in charitable events, Nick was always the first to volunteer to help in any event and was happy to give his time freely in any manner. In fact, I am sure that he is now glowing just knowing that someone’s life may have been spared through the use of his kidneys that were harvested and donated. Likely one of Nick’s greatest tributes, which I was so proud of him for doing happened during the last few months of his life. Nick had a calling to help an elderly gentleman who had been a family friend for nearly 35 years. This individual was nearly blind and barely able to take care of himself and needed assistance. He could not afford any type of in home nursing or paid assistance, so Nick took it upon himself to move in and take care of him during his final few months. On numerous occasions I would ask Nick to go fishing with me, but he would remind me of the obligations that he had to take care of with his friend. It made me a very proud papa seeing him share his gift of compassion and generosity. Totally selfless. At his request, Nick’s earthly body has been cremated and a portion of his remains will remain in a very prominent place in my home so that we can visit daily. In lieu of flowers, Nick and his family would appreciate if you would consider donating to Occupation Christmas Child, Warehouse West Michigan. This is a private organization that this year sent out over 25,000 shoeboxes filled with gifts along with news of the gospel to Third World Countries to children who would likely not receive any other types of gifts or gospel. Checks can be mailed to: OCC, Warehouse West Michigan, 8044 Oak Lane, Cedar Springs, MI 49319. Thank you so much for taking the time and making the time to read what I have written from my heart of our son, brother, sister, relative and dear friend. Nick would have appreciated it.

It is with profound sadness that we announce the passing of Nicolas &#8220;Nick&#8221; DeBartolo at the young age of only 37 years, but we rejoice in the fact that he has earned his bleacher seat in heaven. Nick is survived by his mother and... View Obituary & Service Information

The family of Nicolas "Nick" DeBartolo created this Life Tributes page to make it easy to share your memories.

It is with profound sadness that we announce the passing of Nicolas...

Send flowers to the DeBartolo family.