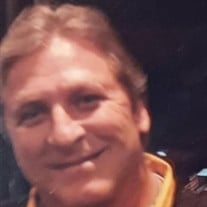 Michael Dieter Morgan January 2nd, 1961 - July 30th, 2021 Grand Rapids, Michigan ++++++++++++++++++++++++++ Michael D. Morgan, age 60, passed away peacefully at home after a courageous battle with cancer. He was with his wife Nancee and dog Jaxx. Mike was preceded in death by his father Daniel. He is survived by his son Robert (Carle) of Dorr, Michigan, mother Rita of Wyoming, Michigan, Brothers Ron (Razel) of Wyoming, Michigan, and Lee of Portage, Michigan. Nephew Brady, nieces Elizabeth, Rita and Gisela. Mike was born and lived his younger years in Mannheim, Germany. He lived all over America also, with his roots being cemented in Wyoming, Michigan. He graduated from Godwin Heights in 1979 where he excelled at football and baseball. After graduation, Mike joined the United States Army and served honorably as a medic. Upon discharge, he spent the majority of his adult life, nearly 30 years, working at Paragon Tool & Die. Mike had two passions in life, with the first being physical fitness. He was a gifted athlete and excelled at every sport he ventured into. By the age of 15 he obtained a purple belt in judo. After high school Mike played semi-professional football from 1982 to 1985 for three different teams in Grand Rapids. In 1986 he fell in love with rugby and played five seasons for the Grand Rapids Gazelles. Afterwards, he pursued martial arts for 15 years. In 2014, a year after a serious motorcycle accident, Mike took up mountain biking and was nationally ranked for his age group after only a year. His other passion was being the ‘life of the party’. Whether it involved libations or not, Mike was the one everybody gravitated towards and wanted to spend time with. His senior yearbook quote said it all; ‘Mike Morgan leaves a huge cloud of smoke behind to all the juniors that party’. The infamous rugby party of ‘86, the Grotto up north, and his many trips to see the Steelers play are just a few of his legendary exploits. This passion for having fun garnered him countless friends around this country and world. Mike was a loving, devoted husband, family man, pet lover, and friend to everyone. He was always there for his family, friends, and anyone who needed help even if they were strangers. Mike requested to be cremated and have his ashes spread in various places.

The family of Michael Dieter Morgan created this Life Tributes page to make it easy to share your memories.

Send flowers to the Morgan family.