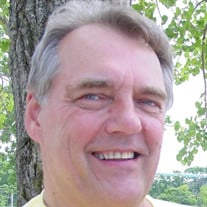 On Tuesday, April 28, 2020, MICHAEL J. LENKIEWICZ slipped peacefully away and now rests, pain free and whole, in the arms of Jesus, his Savior. Mike was born in Muskegon on December 21, 1946 to Shirley (Vanderlaan) and Chester Lenkiewicz. He graduated from Muskegon Catholic Central in 1964 and has an Associates Degree from Muskegon Community College. On August 3, 1968 he married Karla Parrish. She survives him along with his Cooper girls (daughter Keri and granddaughters Danika and Luci) of Norton Shores; his siblings, Fran (Glenn) Goodman of Mill Valley, CA, Mark (Sue) Lenkiewicz of Springfield, MI, Luke (Cindy) Lenkiewicz of Grand Rapids, MI, Diane Raines of Statesville, North Carolina, Tom Lenkiewicz of Summerville, SC, Dan (Kate) Lenkiewicz of Grand Rapids, MI and Lance (Laurie) Lenkiewicz of Littleton, CO; brother-in-law, Sheldon (Darla) Parrish of Norton Shores; his Aunt Judy Vanderlaan of Battle Creek; and the Cone girls, (C.C. and Lizzy) of Norton Shores and many nieces and nephews. Mike was preceded in death by his parents, Chet and Shirley; his grandparents, Tom and Goldie Vanderlaan, and Charles and Angeline Lenkiewicz; sister Beth Anne Lenkiewicz, baby brother Joseph, and mother and father-in-law, Dick and Marie Parrish. Although Mike owned a Subway franchise for a few years, most of his career was with Kaydon Corporation in both Engineering and Sales. He retired from Kaydon on September 1, 2009. Mike was a faith-filled man and a communicant of St. Francis de Sales Catholic Church, where he was a former member of the Pastoral Council, lector, and usher. He enjoyed golf, bowling, playing cribbage with his buddies and spending time with his family – especially at his brother Dan’s cottage. Mike loved being involved. He was a former member of the Muskegon Jaycees, has been on the board of his Credit Union, was the secretary of his bowling league for many years, formerly on the Executive Board of the Miss Michigan Scholarship program, and a current member of the Vikings, Linne Lodge 57. Mike cherished life and he was grateful. He will be remembered as someone who was an amazing husband, father, grandfather, brother and friend, and he will be missed and loved until the end of time. A Memorial Mass will be celebrated Thursday July 2, 2020 at St. Francis de Sales Church, Norton Shores MI at 11:00 am where his family will receive visitors one hour prior to the mass at church. Memorial contributions can be made on Mike’s behalf to either the St. Francis de Sales Completing the Vision Fund or the Muskegon Catholic Central Education Foundation.

On Tuesday, April 28, 2020, MICHAEL J. LENKIEWICZ slipped peacefully away and now rests, pain free and whole, in the arms of Jesus, his Savior. Mike was born in Muskegon on December 21, 1946 to Shirley (Vanderlaan) and Chester Lenkiewicz. He... View Obituary & Service Information

The family of Michael J. Lenkiewicz created this Life Tributes page to make it easy to share your memories.

Send flowers to the Lenkiewicz family.