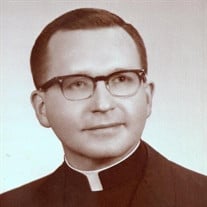 Rev. Michael Anthony Danner, age 82 of Glenn, MI, passed away Saturday, September 4, at Holland Hospital. Mike was born in Ionia, Michigan to late Adelaide Scully Danner and John Danner on April 4, 1939. He was raised in Ionia and attended St. John’s Seminary in Plymouth. Ordained on June 5, 1965, Father Mike served four Michigan parishes over the course of 50 years, including St. John Vianney, Wyoming; Sacred Heart, Muskegon Heights, St. Pius X, Grandville; and St. Jude, Grand Rapids. He also served as Dean and later as Chaplain of Christopher House in Grand Rapids, as a Prison/Jail Chaplain for the Diocese of Grand Rapids, Pastor of St. Jude Home for Veterans in Grand Rapids, and as Aquinas College campus ministry staff. Father Mike exhibited an extraordinary commitment to education with an initial interest in medicine that gave way to his true calling as a priest. Raised in Ionia, Michigan, he attended Saints Peter and Paul High School in Ionia, and St. Joseph’s Seminary in Grand Rapids, MI. Over the years he earned a Bachelor of Arts in Philosophy ’61 at St. Mary’s Seminary and University, Baltimore, MD; a Bachelor of Sacred Theology ’65 and Masters of Divinity in Theology ’80 at St. John’s Provincial Seminary, Plymouth, MI; a Master of Arts in Clinical Psychology ’75 from Western Michigan University, Kalamazoo, MI; a Master of Arts in Religious Education ’79 from Aquinas College; a Bachelor of Science in Biomedical Science ’86 from Grand Valley State University, Allendale, MI; and a Doctor of Ministry in Theology ’90 from Western Theological Seminary, Holland, MI. Father Mike's lifelong commitment to education and admirable service to others throughout his career earned him the respect and admiration of many whose lives he touched. He is survived by many cousins including Anthony Earl, David Earl (Diane), Patrick LaChapelle (Cindy), Gerry LaChapelle (Carol), Julie LaChapelle (Deb), Mary LaChapelle Macqueen (David), John LaChapelle, Gerald Kuhn (Sandy), Kathleen Scully Bartley, Margaret Kuhn Matthews (Dennis), Kay Seward Bowman (Ron), Jim Seward (Judy) and his Goddaughter Lucy Peterson. Many joyous memories have been shared by many generations of the Scully family. In his retirement he had many hobbies and passions and new things he wanted to learn in addition to his lifetime hobbies of stamp and coin collecting. He was never afraid to try new things of interest. He believed in lifelong learning. A concelebrated Funeral Mass of Christian Burial will be held Friday morning, September 10, at 11:00 a.m. at SS. Peter and Paul Catholic Church 434 High Street, Ionia, MI 48846 where he will repose one hour prior to the Mass. This will be livestreamed via the SS Peter and Paul church website https://www.saintspeterandpaulionia.org/worship/. Interment will follow in Mount Olivet Catholic Cemetery 300 4th Street, Ionia, MI. Calling hours will be Thursday evening, September 9, from 5:00 p.m. to 7:00 p.m. at St. Pius X Catholic Church, 3937 Wilson Ave. SW, Grandville, MI 49418. The Vigil Service will be held at 7:00 p.m. In consideration of his abiding interest in the mission of Aquinas College, Father Mike Danner ’79 has created the Danner Scully Pre-Medical Endowed Scholarship and the Danner Scully Liturgical Music Endowed Scholarship, honoring his family and providing support for future generations of Aquinas Saints. In lieu of flowers donations can be made to the Danner-Scully Endowed Scholarships at Aquinas College Advancement Office 1700 Fulton St. E, Grand Rapids, MI 49506, or a charity of one’s choice. Father Mike was very supportive of the work to limit the spread of COVID in our communities with this support masks will be required of all attendees at the funeral. There will be no luncheon held due to COVID.

The family of Rev. Michael Anthony Danner created this Life Tributes page to make it easy to share your memories.

Send flowers to the Danner family.