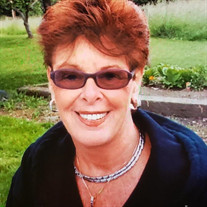 Marcia Zawistowski passed away on 4/29/2022 after a 10-month battle with cancer. She grew up in Ada, Michigan with her twin brother Mark after they were adopted by Hattie and Harold Chapin. She graduated from Forest Hills High School in 1963. Marcia met her first love Warren Lane shortly after graduation and they were married on June 12th 1964. Tragically, Warren was killed in action while serving in Vietnam on March 10th,1968. After the loss of her beloved husband, Marcia once again directed her positive energy to making her way in this world. She worked at Amway, the Wyoming Court system and many places on the West Side. She eventually found her career job working for the US Bankruptcy Court. Marcia worked there for 20 years and made many lifelong friends. In 1983, Marcia walked into the Our Tavern on Veteran’s Day with a friend and as she tells the story “The first time I saw your Dad (Jerry Blue-eyes) I told my friend, I’m going to marry that guy”. They were married on August 3, 1984. With the marriage she inherited an instant family of 5 adult children with very distinct personalities. We got the better deal! Jerry and Marcia soon embarked on a 36-year love story that took them on 35 Carnival Cruises, ZTourz (Tigers/Red Wings) Bus trips, and 20 Years of service to the Knights of Columbus. They were best friends and inseparable. She was by his side on all of his adventures including numerous charitable events that they conducted through the K of C. She loved Jerry unconditionally and accepted her role as wife, mother and grandmother with strength, optimism and love. During Jerry’s final years she was always there when he needed her the most. Marcia was a huge fan of BritBox shows and murder mystery books. James Patterson and David Baldacci were her favorites. She also had a taste for Bud Light and Alfano’s pizza. The joke was the Bud Light truck came by once a week on Tuesdays. She loved her backyard and the pool, spending hours looking at the water, enjoying time with neighbors and friends, listening to music, dipping a toe in every now and then while balancing a beverage in her hand. Marcia had many distinctive traits that endeared her to many. She was always smiling and her happy go lucky spunkiness led to many lively and memorable moments. Marcia touched many lives with her infectious energy. Sadly, she was diagnosed with cancer shortly after Jerry’s death. As was her style she remained positive throughout her treatment and fought like a champion right to the end. Even as cancer ravaged her body, her toughness and resiliency to keep fighting was amazing. We will miss her tremendously! Marcia was preceded in death by husbands, Warren Lane and Gerald (Jerry) Zawistowski and her twin brother Mark Chapin. She is survived by five children, Denise Kanoza, Jerry (Lana) Zawistowski, Thomas Zawistowski, Todd (Tran)Zawistowski, and Russell (Sally) Zawistowski; her nephews, Matt and Jody Chapin; niece, Sherry Chapin. She will be missed by her 9 grandchildren; Ryan (Liz)Levandoski, Jeremy Levandoski, Andrew (Amy) Kanoza, Aaron Kanoza, Nicholas, Tara, Rachel, Benjamin, and Simon Zawistowski; her five great grandchildren, Izaac Levandoski, Dylan, Liam, Lucas Levandoski and Lucy McCurry. To Honor Marcia’s wishes, the family would like to invite you to her Celebration of Life at 6th Street Hall on Friday May 13th from 4 to 9pm. We will be offering appetizers from 4 to 5 and Celebration of Life to follow. Food will be served from 6 to 9. Please bring a story and share a memory.

Marcia Zawistowski passed away on 4/29/2022 after a 10-month battle with cancer. She grew up in Ada, Michigan with her twin brother Mark after they were adopted by Hattie and Harold Chapin. She graduated from Forest Hills High School in 1963.... View Obituary & Service Information

The family of Marcia Zawistowski created this Life Tributes page to make it easy to share your memories.

Send flowers to the Zawistowski family.