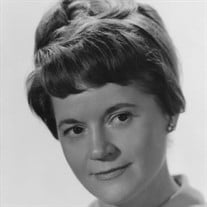 June Hall, nee Lapinski, age 90, of Grand Rapids, Michigan, saw her earthly light peacefully extinguish itself at 10:30 in the morning on March 5, 2021. Daughter of Walter and Mary Lapinski, who emigrated to the United States from Poland, her light follows that of her beloved husband Harry Hall, sister Helen Lapinski, sister Irene Samiec and brother-in-law Walter Samiec, and brother Roman Lapinski into eternal peace. The memory of her beautiful light will be carried forward by her daughter Nicole Hall, son Gregory and his wife Andreea (nee Brudasca) Hall, son Daniel and his wife Sandra (nee Gillette) Hall, grand-children Maya, Emma, Jack, Grace and Cara, and a kaleidoscope of friends made on four continents over nine decades. June had always wanted to be a nurse, remembering fondly her time spent working as an assistant to Dr. Heetderks in Grand Rapids, but fortunately for children around the world, she would instead become an elementary school teacher after excelling in her studies at Michigan State University. She first taught for a few years in Grand Rapids before joining the Department of Defense Dependent Schools, teaching the children of US troops stationed overseas in Yakota (Japan) for one year, Ankara (Turkey) for one year, Laon (France) for one year, Seville (Spain) for one year, Madrid (Spain) for two years, Kenitra (Morocco) for nine years, West Berlin (Germany) for 16 years and Pirmasens (Germany) for three years. Her innate kindness and natural tenderness endeared her to her young students, some staying in touch with her into their adult years. On her first trip abroad, awarded for academic excellence by the Grand Rapids World Affairs Council, June visited India, on which occasion she met the country’s first Indian Prime Minister, Jawaharlal Nehru, as they were journeying on the same train. Her love for travel and wonder at the beautiful diversity of this world, which she had only known through books, blossomed in India. A lover of classical music, opera, and museums, her life’s sojourning around the world allowed her to enjoy performances in many famous concert and opera halls, including regularly attending performances in such venues as the Berlin Philharmonic and one year even treating her family to the New Year’s Eve Kaiser’s Ball in Vienna. She would also indulge her love of the arts by visiting world renowned museums in the countries she lived in and visited. June lived her life in peace and for peace. This was most strongly reflected in her love of nature and for animals great and small. All who were warmed by her light know the kindheartedness and gentleness she radiated. Those who were lucky enough to have that light cast their shadows will notice that the world is now a little dimmer, their shadows a little less defined. A Mass of Christian Burial will be celebrated on Saturday March 13, 2021 at 11:00 am at the Basilica of St. Adalbert Church, the family will receive visitors from 10:00 to 11:00 am. Internment Holy Cross Cemetery. We ask that you kindly respect social distancing and mask requirements. The Funeral service will be livestreamed on YouTube : “Basilica of St. Adalbert - Grand Rapids”. https://youtube.com/channel/UCraHc4x4fPq9-SvWuPfhNnw Memorial contributions can be made to the NEA Foundation in June’s name.

June Hall, nee Lapinski, age 90, of Grand Rapids, Michigan, saw her earthly light peacefully extinguish itself at 10:30 in the morning on March 5, 2021. Daughter of Walter and Mary Lapinski, who emigrated to the United States from Poland, her... View Obituary & Service Information

The family of June Hall (Lapinski) created this Life Tributes page to make it easy to share your memories.