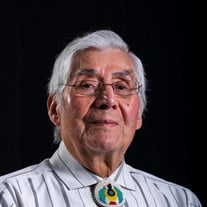 Johney Chisholm of Grand Rapids MI, passed away on Saturday, October 16th, 2021 at the age of 94. He was a member of the Muscogee Creek Nation. Johney was born in Coweta, Oklahoma to John and Jennie Chisholm in 1926. His early years were filled with hardship and sorrow. Johney grew up during the Great Depression and the Dust Bowl. His mother died the week before his eleventh birthday from surgical complications. His father and older sister Agnes helped raise Johney and his three brothers on the family farm outside Coweta Oklahoma. The brothers would hitch rides into town in the bed of a neighbor’s pickup truck. Johney’s older brother Marvin had epilepsy and on one those rides Marvin fell from the truck during a seizure and died. Johney ended up leaving school after the 6th grade to help out the family. He did receive his GED later in life. Johney enlisted in the Army in March of 1946. He was sent to Germany after the end of WWII. He served as a cook and attained the rank of Sergeant. He was awarded the World War II Victory Medal and the Army of Occupation Medal. After his Honorable Discharge in 1949 he served as an Army Reservist until 1951. He would come up to Grand Rapids from Fort Custer in Battle Creek with an army buddy hoping to meet other Native Americans. He met and fell in love with an Odawa Indian woman named Gloria Leo, whom he would marry in September of 1951. The courtship was a tad difficult as Gloria’s five younger brothers and sisters would all coming running out and jump in the car with them whenever he came to pick her up. He was always patient and never got mad. He would take them all for a car ride and then go on his date with Gloria. Johney and Gloria were married for 64 years and had two sons and a daughter. They also fostered and adopted a young Native girl. Their home was always a gathering spot for holidays and birthdays. He enjoyed the family gatherings and was always welcoming and friendly to all. He would entertain some of us with the “old soft shoe” dance and at other times yell out “yee haw”. He was a respected man with a kind soul. He loved visiting with all the nieces, nephews and grandchildren. He would often say “sit down and tell me your problems” and listen to what you had to share. After Johney left Oklahoma he worked many different jobs. He worked for the Civilian Conservation Corp in Colorado, and at a spinach cannery. He did demolition work, and helped erect billboards around Grand Rapids. One billboard still stands at 28th st and Division. He worked at a local factory processing feathers and down. He even worked a short time at the John Ball Park Zoo doing yard work with the City Park Department. Johney was a dependable hard worker taking many side jobs to try and make ends meet. He wanted to support his family and send his children to private school. Finally he found a permanent job with the Grand Rapids Public School system in the mid 1960’s working as a custodian. He started at Union High school and then moved to Iroquois Middle School where he was promoted to the building manager. He earned several energy management awards while there. He retired from the GRPS after 25 plus years. Johney was a man of faith. He always had a great sense of humor and was quick to smile. As a Native American man he was met with prejudice and racism throughout his life. He held his head high and set an example for his children. He was friendly and outgoing always talking and visiting with his neighbors, offering to help whenever he could. He would help out family and friends any and all the time. He loved spoiling his dogs, Cobain and Kuma, always feeding them some food from the table. He enjoyed walking and he took Cobain to nearby Wilcox park everyday so he could play with his dog friends. When his wife Gloria developed vascular dementia he became her caregiver. Cooking for her and keeping up the house until her death in 2015. Johney was preceded in death by his parents, his sister Agnes Cowles, brothers Marvin and Marion of Oklahoma and his brother Eugene Chisholm of Wyoming Michigan. Also preceded in death by his grandson Richard Red Bow, daughter Jeanette DeRivera, Kim Needham (John M) and five of Gloria’s siblings. Surviving Johney are his sons John M. Chisholm, Michael D. Chisholm (Mary), and daughter Dawn Chisholm-Thorpe (John) [who was deemed the “worst son-in-law ever” lol ]. Sister-in-law Rosalee Star Chief (nee Leo), grandchildren Delbert and Ian Chisholm of New Mexico, Danielle Cenci (Matt) and John M. Jr (Elyssa) of Grand Rapids. 7 great grandchildren, many nieces and nephews and their children. A Mass of Christian Burial will be celebrated Friday October 22, 2021 11:00 am at St. Alphonsus Church where his family will receive visitors one hour prior. Interment Holy Childhood of Jesus Cemetery Harbor Springs MI. His family will receive Thursday 2:00-4:00 pm and 7:00 pm-9:00 pm at the Arsulowicz Brothers East Mortuary, 937 Michigan St NE

Johney Chisholm of Grand Rapids MI, passed away on Saturday, October 16th, 2021 at the age of 94. He was a member of the Muscogee Creek Nation. Johney was born in Coweta, Oklahoma to John and Jennie Chisholm in 1926. His early years were filled... View Obituary & Service Information

The family of Johney Chisholm created this Life Tributes page to make it easy to share your memories.

Johney Chisholm of Grand Rapids MI, passed away on Saturday,...

Send flowers to the Chisholm family.