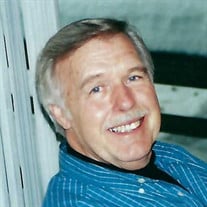 John Wesley Woods born January 24, 1938 in Samburg, TN to Jessie (Opal) Hoffman Woods and John Chester Woods. He went to be with his Lord and Savior Jesus Christ on March 27, 2021. He was preceded in death by his wife of 48 years Marie Ackerman Woods, mother and father, son James Woods, daughter Melanie Woods, grandson Brandon Woods, brothers Billy, Steve and Tex Woods, sisters Darlene (Kermit) Mongar, Betty (Ron) Bloomer. John is survived by his younger brother Robert Woods, his son John Woods and Erica Falk, daughters Marcia Woods and Shelly Woods Jarrar, sister-in-law Barb Woods, grandchildren John (Sabrina) Woods, Jessica (Eric) Jones, Katelyn (Jarrett) Wallace, Annah (Nate) Chouinard, Aiman Jarrar, Darrell Schneider, Monika (Ozgen) Calisir, Melinda (Sam) Dertien, Kourtney, Katrina and Chad Notenbaum and many great grandchildren. John was a Pastor for most of his life. He started his Ministry in his mother’s basement on Indiana St. Grand Rapids, MI in 1961, which they quickly outgrew. Then moving to an old church on Coit St. in Grand Rapids, MI. From there to National St Grand Rapids, MI as the congregation multiplied. By the time he had left that church building in the early 1970’s. John’s ministry had brought many people to know the Lord Jesus Christ and had shown many people how to have faith in the power of God’s word. After a period of time, Pastor John Woods was able to find a 40 acre piece of property on 64th Ave in Allendale, MI with turkey barns and an old farmhouse. Through God’s direction and plan, the brethren of the church all banded together to convert the buildings into the next church, Deeper Life Tabernacle. Music has always been a major part of John’s ministry as his whole family all played instruments and sang with Pastor Woods leading the song services with his Martin guitar! Several young men became ordained Ministers through Pastor Woods, and also with some starting their own churches as well. He also started J&J Motors in Allendale during this time that became his ministry also. After taking a hiatus from pastoring, in 2001 John’s niece and nephew contacted him to see if he would be interested in taking over their dad’s church and food pantry on Bridge St. Harry Dunn had recently passed away and was John’s brother-in-law. So John along with Assistant Pastors Nelson Morren and Steve Winterhalter stepped in and his ministry ended up back in Grand Rapids on the west side once again. The Jesus Evangelistic Center provided food boxes and the Lord’s word for anyone and everyone interested. Many Christian bands and singers such as Teen Challenge were frequent visiters. John retired in 2020 after serving the Lord and God’s people. A Funeral Service will be held on Thursday, April 15 at 1:00 PM at Georgetown Christian Fellowship 3668 Port Sheldon St. Hudsonville, MI 49426. Visitation 1 hour prior. Interment at Rosedale Memorial Park in Standale. Memorial contributions may be made to Faith Hospice.

John Wesley Woods born January 24, 1938 in Samburg, TN to Jessie (Opal) Hoffman Woods and John Chester Woods. He went to be with his Lord and Savior Jesus Christ on March 27, 2021. He was preceded in death by his wife of 48 years Marie Ackerman... View Obituary & Service Information

The family of John Wesley Woods created this Life Tributes page to make it easy to share your memories.

Send flowers to the Woods family.