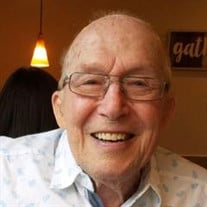 John Leo Magin, age 90, passed away peacefully with his children by his side on January 29, 2021. John was born on June 1, 1930 to Francis and Victoria Magin and grew up in Belding, Michigan. He was a U.S. Navy Veteran, serving during the Korean War. He was married to his beloved wife, Barbara (Malone) for 65 years and she preceded him in death, along with his brother Paul and sisters, Rosemary Peck and Blanche Rydel and son-in-law, Daniel Kopec. He is survived by his 7 children, Mary (Brian) Wisinski, Sherry (Kip) Engen, Deb Datema, Kathy Kopec, Sue Magin, Tim (Moira) Magin and Duffy (Jill) Magin, 15 grandchildren, 6 great grandchildren and numerous nieces and nephews. A tool and die maker by trade, John worked at General Motors for 38 years. While raising 7 kids, he also worked alongside his wife, Barb, helping with her 50-year Tupperware business; either packing and delivering Tupperware or holding the fort at home as the “chief cook and bottle washer!” John was a dedicated husband, father and grandfather. He loved having a good time and was often found telling a good joke or being the life of the party. He was a great friend and neighbor and always there to lend a helping hand. John made a special point of leaving people with a smile on their face or a story or joke to remember. As a member of St. James Catholic Church for more than 65 years, John was a devout Catholic who continuously offered his service in many capacities, from readings at Mass to cooking at Church fish frys or pancake breakfasts. Even after moving to Covenant Village of the Great Lakes a few years ago, John organized church services there and did the readings during Mass. John’s deeply held beliefs: an abiding faith, love of family and service to country and community are the legacy he leaves us to cherish and continue. If he could leave you with anything, he would tell you to serve the Lord and make it your mission to bring a smile to someone every day, even with a corny joke. The family would like to extend a special thanks to the staff and residents of Covenant Living of the Great Lakes, his second family. The care and comfort from Spectrum Hospice is also deeply appreciated. A funeral mass for John will be celebrated on Saturday, February 6th at 11:00am at Holy Spirit Catholic Church. Relatives and friends can meet with the family one hour before. Interment St. Patrick's Cemetery, Parnell. In lieu of flowers and in honor of his beloved great-grandchildren, Sawyer and Daxton, donations can be made in John’s memory to Project Alive who fund research for Hunter’s Syndrome at https://projectalive.org or Project Alive, PO Box 23182, Knoxville, TN 37933.

John Leo Magin, age 90, passed away peacefully with his children by his side on January 29, 2021. John was born on June 1, 1930 to Francis and Victoria Magin and grew up in Belding, Michigan. He was a U.S. Navy Veteran, serving during the Korean... View Obituary & Service Information

The family of Mr. John Leo Magin created this Life Tributes page to make it easy to share your memories.

John Leo Magin, age 90, passed away peacefully with his children...

Send flowers to the Magin family.