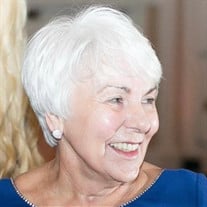 JoAnn Zyniewicz, 83, lifetime resident of Grand Rapids, Michigan, passed away on October 5, 2021. JoAnn Zyniewicz was born August 1, 1938 to James Kelley and Helen [Shipaila] Kelley and was the late widow of Thomas Zyniewicz. With her brother, Bob Kelley, JoAnn attended St. Peter & Paul, for which during this time the Franciscan nuns had an enormous impact on them both. JoAnn and Bob continued to Union High School, where JoAnn graduated in 1956. At Union High School, JoAnn met the love of her life: Thomas (Tom) Zyniewicz. JoAnn and Tom married in 1959 and were separated by Tom’s death in 2018, just short of their 60-year anniversary of marriage. JoAnn was also preceded in passing by her brothers Donny, Val, sister Virginia, and granddaughter Tiphany. JoAnn’s proudest accomplishment in life was raising her two children, Kelley JoAnn Zyniewicz and Thomas J. Zyniewicz II, who went on to both become accomplished physicians. JoAnn never missed an opportunity to invite the question, “Did you know my children are doctors?”, into any conversation. JoAnn is survived by Kelley Zyniewicz and (Marcus Topinka), grandchildren (Andrew Topinka, Elizabeth Topinka), Thomas Zyniewicz and Tammy Zyniewicz, grandchildren Tara (John) Pearce and Avery Zyniewicz (Edward Evans); and great-grandchildren Henry Thomas and Rose Estelle (Pearce). JoAnn is also survived by her brother Bob Kelley, Ed and Mary Zyniewicz, as well as nieces and nephews. The family owes an everlasting debt to Betty Ballenger--a lifelong friend to JoAnn. Among other happy memories, their families were close knit while raising their children and they loved boating together through Lake Michigan. JoAnn could always count on Betty, who was at her side until the end. In addition to Betty Ballanger, JoAnn was inseparable from her 7th grade friends: Georgia Pacific, Janice Topping, and Bettye Iacovoni. Marsha Nikodemski also remained a dear friend for life. We should all be as blessed as JoAnn to have loyal family and friends. The family appreciates and thanks all who touched their beloved JoAnn. Per her wishes cremation has taken place. A Memorial Mass will be celebrated on Saturday October 23, 2021 11:00 am at Assumption of the Blessed Virgin Mary Church, 6390 Belmont Ave NE, Belmont, MI 49306 where her family will receive visitors from 10:00 am-11:00 am at church. We should all be as blessed as JoAnn to have loyal family and friends.

JoAnn Zyniewicz, 83, lifetime resident of Grand Rapids, Michigan, passed away on October 5, 2021. JoAnn Zyniewicz was born August 1, 1938 to James Kelley and Helen [Shipaila] Kelley and was the late widow of Thomas Zyniewicz. With her brother,... View Obituary & Service Information

The family of Joann Zyniewicz created this Life Tributes page to make it easy to share your memories.

Send flowers to the Zyniewicz family.