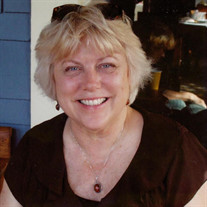 Janice “Jan” Koprowski, 75, passed away on March 26, 2022 after a brief and courageous battle with multiple myeloma. Jan and her twin sister were born in Washington DC to Joseph F. and Stella Koprowski. She attended St. Adalbert School and West Catholic High School, class of 1965. She earned her BA, MA and Specialist degrees from Western Michigan University and attended the National Institute of Holistic Medicine in San Francisco. Jan lived in Grand Rapids, Kalamazoo, and Benton Harbor, MI as well as San Rafael, CA before moving back to Grand Rapids in 2018. Jan was predeceased by her father, Joseph F. and mother Stella and brother Joseph P. Koprowski. She is survived by her twin sister Joyce and husband Neil Turmell and their children, Steve (Laura) and Jodie (Stoney) Lundin and their two children, Amelia Grace and Ridley Rose. She is also survived by her brother Paul and his wife Cindy and their two children Kelsey and Eleanor. Jan had many lifelong friends all over the country. She treasured them, especially her cousin and dearest friend Jayne Johnson and her husband Brian. She was very excited to renew friendships when she moved back to MI. She thoroughly enjoyed travel and time with friends and family. She was a swashbuckling critic, a connoisseur of everything film and television. She doted on kids with motherly affection, teemed with the benefit of being the carefree aunt. She loved visiting Ashland, OR or anyplace there was a Shakespearean Festival where she would often take in a play… or few. Jan had numerous artistic talents, but her passion was designing costumes for over 200 plays at numerous theaters in the SF Bay Area, including her favorite Les Miserables. She even won theatre critics awards for her costumes. She often spoke of the importance of creativity in life in order to thrive. Many people still enjoy her stained glass work and her sewing. Jan served as the gold standard of independent, self-sufficient women. When advice was required, she was there to offer it. If you needed consolation, she was always available. If the time arose for opinions, you got them. Jan valued fun and always included many others for her dinners and celebratory gatherings. She always had the integrity to do what was right even when it was hard or inconvenient. If someone need help, she dropped her plans and went to them. She will be missed by so many. Jan lived a quality life, her memory we shall always recount and treasure. A visitation will be held at Arsulowicz Brothers Remembrance Mortuary at 3525 Remembrance Rd NW on Sunday, April 3 from 4:00 until 7:00 when a rosary will be prayed. Her funeral Mass will be on Monday, April 4 at 11:00 at Holy Spirit Church with an hour of viewing from 10:00 -11:00. She will be interred at Holy Cross Cemetery with her parents and brother. In lieu of flowers, you can remember Jan in a special way with a gift to Partners in Health, PBS (WGVU) television or Feed the Children.

Janice &#8220;Jan&#8221; Koprowski, 75, passed away on March 26, 2022 after a brief and courageous battle with multiple myeloma. Jan and her twin sister were born in Washington DC to Joseph F. and Stella Koprowski. She attended St. Adalbert... View Obituary & Service Information

The family of Janice "Jan" Koprowski created this Life Tributes page to make it easy to share your memories.

Send flowers to the Koprowski family.