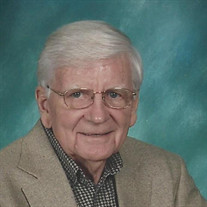 James Gerson Dillard, age 95, passed into eternal life on April 2, 2022. He was born in Akron, Ohio, on August 23, 1926, to the late Gerson and Anna Dillard. He and the love of his life, Jackie, were married 75 years. Jim entered the Goodyear Tire and Rubber Co. Apprenticeship program at the age of 17, working 7 days a week, before entering the military at 18, serving in the Army Air Corp during World War II from 1944-1946. His military assignment was instrument maintenance on the aircrafts, many of which were used to bring the service personnel back to the states. After his military service, he returned to Goodyear to fulfill his apprenticeship, receiving his machinist certification in 1949. Jim worked as a maintenance supervisor in Goodyear’s Foam Plant. After 23 years of job security and guaranteed pension plan, he moved his family to Marion, Indiana, where he worked as plant engineer at General Tire, working long hours and seven days a week for 8 years. He was then recruited by Edge Sweets, a small company that manufactured foam processing machinery. He was hired to sell their machinery, no longer on the operational/purchasing side of the foam equipment industry. His design skills at Edge earned him a patent for a pour line, producing “Flat Top Foam”. He retired from Edge Sweets in Grand Rapids, after 17 years. Jim met and married his beloved wife, Jackie, in 1947. They were a great team in their life ventures, whether it be raising 5 children, or building their first house themselves after reading “How to Build Your Dream Home for $3500”. Jim was devoted to Jackie, and upon meeting all of his milestones, continued to find ways to provide comfort and companionship in their last chapter together. Jim will be remembered as a hard worker, a man who could “fix nearly anything”, but who also knew how to have fun. He could liven up any dance floor and led the way on countless family line dances. His most enjoyable recreation was boating and skiing with the family. A special memory of him is watching him ski at the age of 85. Jim was a Masters bridge player, and played cards up until a few days before he passed. He also enjoyed golf, and wintering in Brownsville, Texas, where his children and grand-children hold many fond memories. In addition to his wife, Jackie, Jim will be deeply missed by his children Linda (Sam) Jones, Debbie (Dennis) Stark, Jim (Carol), Judy (Steve) Vitto, and Jan (Dan) Viglione, as well as his 14 grandchildren, Chris, Kelly, Katie, Andy, Michael, Aaron, Anna, Rachel, Kim, Tony, Amy, Angela, A.J., and Alex, and his 34 great grand-children. He was preceded in death by his son-in-law Mike Viglione and only sibling, Mary Lou Balaj. A Mass of Christian Burial will be celebrated Tuesday at 11:00 am at St. Anthony of Padua Church where his family will receive visitors from 10:00 am- 11:00 am. Interment Rosedale Memorial Park. His family will receive visitors Monday from 4:00 pm -6:00 pm at the Arsulowicz Brothers Remembrance Mortuary, 3525 Remembrance Rd NW. Memorial contributions to St. Jude’s Hospital will be appreciated.

James Gerson Dillard, age 95, passed into eternal life on April 2, 2022. He was born in Akron, Ohio, on August 23, 1926, to the late Gerson and Anna Dillard. He and the love of his life, Jackie, were married 75 years. Jim entered the Goodyear... View Obituary & Service Information

The family of James Gerson Dillard created this Life Tributes page to make it easy to share your memories.

Send flowers to the Dillard family.