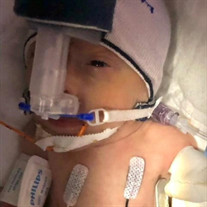 Ethan Bruce Williams was born January 8th, 2022, in Grand Rapids, Michigan, along with his identical twin brother, Thomas Eric Williams. Ethan passed away peacefully six days later on January 14th, 2022, in the arms of his mother, Rachel M. Williams, and in the company of his brother, Thomas, and his father, Robin Smith, his maternal grandparents, Eric and Jane Williams, and several of his aunts and uncles. Ethan brightened the world for six wonderful days, for which his entire family is deeply grateful. Ethan bravely battled twin to twin transfusion syndrome throughout his mother’s pregnancy. He survived three major surgeries. His tiny but mighty heart was not strong enough to survive his heart valve surgery. It was on January 14th that Ethan gained his baby angel wings and left our world as we know it. Rachel and Robin are eternally grateful to Dr. Quintero for assisting their pregnancy by performing the second twin to twin transfusion surgery. If not for him they would not have met either little soul. Ethan is survived by his identical twin, Thomas, his parents, Rachel Williams and Robin Smith, siblings Logan, Madeline(Joe), Mackenzey, Lyndzie, and Scotty Smith, honorary sister, Victoria Jackson, his maternal grandparents, Eric and Jane Williams, paternal grandparents, Bruce and Valerie Smith, paternal grandmother, Janice Saylor, great grandmother, Katherine Williams, as well as numerous aunts, uncles and cousins. A service honoring Ethan’s life will be held at Remembrance Chapel on January 21, 2022. Starting with visitation at noon and service at 1pm. Due to COVID and Thomas in the NICU the family asks that this be a private service.

The family of Ethan Bruce Williams created this Life Tributes page to make it easy to share your memories.

Send flowers to the Williams family.