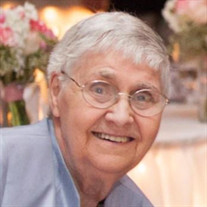 Bailey, Esther Mae, age 91, born April 29, 1929 passed away Wednesday, September 2, 2020 at Porter Hills Memory Care in Grand Rapids, Michigan. Esther was preceded in death by her husband and best friend, John Bailey Sr. and her daughter Debra Bailey. She is survived by her children and their spouses; John (Cindy) Bailey Jr., Denise Bailey (Kurt) Thorne, Pamela (Tom) Lovesy; grandchildren, Sara (Josh) Dykhouse, John (Fiancé-Katarina) Bailey III, Jacob (Katie) Lovesy, Caitlyn (Robby) Irwin, Alix Bailey and great grandchildren Liam, Josephine, Emma, Grayson, Addilyn and Aiden. Esther was a woman of many talents. As a master seamstress she designed and sewed beautiful clothing. She and her husband also designed and built two custom homes, where they lived and raised four children. After completing the second home, they purchased and moved to a 26-room motel in Niles, Michigan. Although having no experience in this industry, Esther stepped into this role with bravery and tenacity. With lots of hard work the business was a great success. Selling the motel and moving back to Grand Rapids, they continued to decorate and remodel several of their own homes. Esther lived at Porter Hills for years where she loved the social interaction. She would often walk the hallways and strike up a conversation with the people she would meet along the way. Esther was involved in the Grand Rapids community by volunteering at several charities. From helping young women to the work she did at St. Mary’s hospital, she made a difference for many. When she wasn’t with family, friends or volunteering, you could find her knitting or sewing a baby quilt for someone special. She continued with these activities until she lost the ability. She was much loved and will be missed by many. A private memorial for family will be at a later date. In lieu of flowers, Esther’s family suggest a contribution in her honor, to Hospice of Michigan, 989 Spaulding Ave SE, Ada, Michigan 49503.

The family of Esther Mae Bailey created this Life Tributes page to make it easy to share your memories.

Send flowers to the Bailey family.