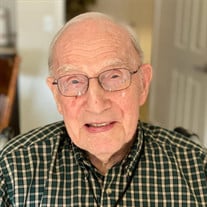 Ernest J. Smith age 96, born June 20th, 1924, went to be with his Lord and Savior on November 20th, 2020, having suffered from Alzheimer’s disease. Preceded in death by Wife Audrey (Lobdell) Smith who passed away March 1997; Son Ernest Jr. and Daughter-in-law Gerry (Clifford) Smith, Parents Ernest E. and Marie F. (Dudick) Smith, Brother Leo Smith, Sisters Rita Smith, Bernice Johnson and Dorothy Smith. Ernest is survived by his Daughter Evelyn (Dr. David) Graham, Son Eric (Annmarie) Smith, Grandchildren; Jessica Smith, Ernest III (Cat) Smith, Joshua Smith, Jeremy Smith, Audrey Smith, James (Amanda) Stoffers, Steven Stoffers (Tiffany Woodhead), Michael Stoffers, Mark (Erin) Stoffers, Christina (Paul) Watkoski, Eric Jr. (Lisa) Smith, Elizabeth (Andrew) Watkoski, 18 great-grandchildren: Danny, Shawn, Charleigh, Joshua, Logan, Hunter, Allison, Joey, Keegan, Lillian, Evan, Caleb, Audra, Noah, Ella, Mackenzie, Brady, Maylee. Ernest was born in Muskegon, MI. He attended St. Joseph school, and transferred to St. Mary’s school for his senior year, but left prior to graduating to enlist in the US Army during WWII. He was assigned to the 5th Armored Division and was awarded the Purple Heart for wounds sustained in the Battle of the Hurtgen Forest. Following the war, he completed his degree from Muskegon Business College. He was co-owner of Radel Auto Service in Muskegon. He was a Sporting Goods Manager at Montgomery Ward in Muskegon for just under ten years, where he met Audrey, and they were married on September 10th, 1955. He began working at Meijer in 1964 starting at the Norton Shores Thrifty Acres with the leasing company C.J. Toys. He spent most of his 25 year career as a Sporting Goods Buyer. He was recognized for his Merchandising skills by Discount Merchandiser Magazine and other various awards. He moved his family to Grand Rapids in 1969 where corporate headquarters were located. With his wife, he also owned and operated Ball Floral in Lowell for a short time. A devoted Catholic, he served the parish of St. Francis de Sales in Muskegon, before joining St. Anthony’s of Padua Grand Rapids in 1969. He faithfully served the parish in several ministries including Home and School, Buildings and Grounds, chair of the Ushers for several years, a Sacristan, Eucharistic Minister, and was a member of the R.C.I.A. program for several years, providing instruction of adults in the Catholic faith preparing them for the Sacraments of Initiation. His most cherished ministry was Project Family which he led for many years. This committee operates an emergency food pantry and also had provided Christmas gifts to those in need. He was always dedicated to helping families in need, building relationships that would provide for both their physical and spiritual needs. He was recognized in 2006 by the Diocese of Grand Rapids Social Justice organization, with a Best Practices Award in Charitable Service. He was just as devoted to his family and friends as he was to his ministries. He traveled extensively through the entire continental United States with his wife and children, and then again with his grandchildren. Ernest was dependable and giving, assisting anyone who needed a helping hand, a ride, a meal, or just a listening ear. His most enduring Christian virtue was that he accepted everyone, and would only ever recognize a person’s positive qualities. Ernie shared his love and compassion with everyone he met, spreading peace and joy. A Mass of Christian Burial will be celebrated Wednesday 11AM at St. Anthony of Padua Church, where he will repose one hour prior to Mass. Interment Holy Cross Cemetery. The family will receive visitors Tuesday 6-8PM at the Arsulowicz Brothers Remembrance Mortuary 3525 Remembrance Rd NW, where a Rosary will be prayed at 8PM.

The family of Mr. Ernest J. Smith created this Life Tributes page to make it easy to share your memories.

Send flowers to the Smith family.