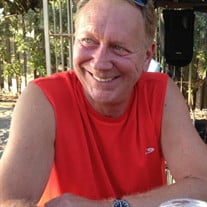 Mr. Douglas “Kirk” MacFarland Jr. (Captain Kirk), was called to heaven Sunday September 19, 2021 after a brave and courageous battle with Cholangiocarcinoma, a rare and aggressive cancer. He was preceded in death by his parents Doug and Marylou, his father and mother-in-law Harry and Emily Moore, and his nephew John. Surviving are: his loving wife of 44 years, Julie; his adoring daughters and sons-in-law Jodi and Seth Carter, and Sam and Tyler Klaskow; his grandsons Marcus and Jordan Carter; his sister and brother-in-law Debbie and Dennis Wakefield; his sisters and brothers-in-law Mike and Viv Moore, Debbie and Ron Caffo, Cornelia and Tom Grishkat, Therese and Paul Conkle, Martha and Dave Upp, and Rob and Jenny Moore; and several nieces and nephews. Kirk was born in Painesville, OH on October 3, 1954. He graduated from Gahanna Lincoln High School in 1972 and from Ohio Institute of Technology in Columbus, OH in 1974. After working for the Georgia Pacific Gypsum Division in quality and plant operations for 18 years, he founded Extreme Remodeling, LLP which is owned and operated for over 20 years. Kirk would often be found socializing with friends and spending time with his family and dog, Buddy, when he wasn’t sitting outside enjoying his yard in the Michigan summers. He especially loved his Peppino’s family and anything U of M. The Celebration of his life will begin Thursday September 23, 2021 11:00 am at St. Mary’s Catholic Church, Marne, which will continue after at 1:00pm at Peppino’s Pizzeria and Sports Grille in Allendale. In lieu of flowers, memorial donations can be made to the St. Mary’s Foundation http://saintmarysfoundationgr.com/ Here’s to you, Go Blue!

Mr. Douglas &#8220;Kirk&#8221; MacFarland Jr. (Captain Kirk), was called to heaven Sunday September 19, 2021 after a brave and courageous battle with Cholangiocarcinoma, a rare and aggressive cancer. He was preceded in death by his parents... View Obituary & Service Information

The family of Mr. Douglas "Kirk" MacFarland Jr. created this Life Tributes page to make it easy to share your memories.

Send flowers to the MacFarland family.