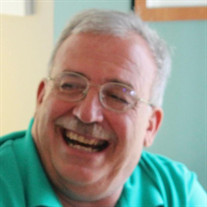 Deno P. Stamas, age 72, of Grand Rapids, MI died March 23, 2021. Deno was born December 7, 1948, in South Bend, Indiana, to Peter and Alexandra Stamas. He was a graduate of Grand Rapids Central High School. After high school he served his country in the U.S. Army during the Viet Nam War. He was stationed in Frankfurt, Germany for the duration of his duty. After being honorably discharged, he returned to Grand Rapids and went to work for Mr. Burger Corporation. He worked as a manager at the Lake Michigan Drive location and continued his education at Ferris State University where he earned his bachelor’s degree in Business Administration. He went on to open the second Mr. Burger location with founders Peter and Maria Christopoulos at 44th and Clyde Park, as a co-owner. He also had an ownership interest in the Northland Drive Mr. Burger. His career with Mr. Burger spanned over 50 years. He was a devout Christian who was married for 47 years to the love of his life Karen Plesscher. They had a daughter Nikki, whom he adored as a loving father. He was admired by his colleagues for his business acumen, mentorship and fairness. He will be truly missed by family, and friends. Deno is survived by wife Karen, daughter Nikki, brothers George (Midge), James (Laurie), sister Cleo, brothers-in-law Dean (Peggy) Plesscher, Wayne (Kristi) Plesscher, Stan (Kim)Thomas, many nieces, nephews, grand nieces and nephews and many cousins throughout Greece. May his memory be eternal. The family will receive visitors Monday, March 29, from 10:30 am to 12:30 pm at the Arsulowicz Brothers East Chapel at 937 Michigan Street NE in Grand Rapids, MI. Masks and social distancing are required. A private family funeral will be held at 1:00 pm. The funeral will be livestreamed on the funeral home website. Burial will take place Wednesday, March 31, at 10:00 am at the Pentwater Township Cemetery 8060 US-31 BUS, Pentwater, MI 49449. In lieu of flowers, memorial contributions may be made to the Pentwater Community Food Pantry through the First Baptist Church of Pentwater.

The family of Deno P. Stamas created this Life Tributes page to make it easy to share your memories.

Send flowers to the Stamas family.