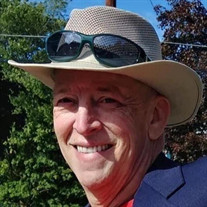 Mr. David R. Kroon, Age 59 of Grand Rapids, MI passed away after a valiant battle with lung cancer. On Monday November 16, 2020, heaven gained an awesome angel. David Kroon, (the Golden Child) born on July 9, 1961 was preceded in death by his father Robert T. Kroon. He is survived by his wife Lynda Kroon (Lane) of 31 years, his mother Bonnie Kroon (Meeter), siblings, Karen Galipault (Rick), Bruce Kroon (Deb Covert), Linda O’Rourke (Michael) and JoAnn Kroon. Nieces and nephews Brandon and Christopher Kroon, Caitlin Schellhammer (Mike), Tara Galipault, and Emily and Andrew O’Rourke. David joined the family household at 223 Summer St. where he became a proud lifelong “westsider”. Dave attended St. Mary’s Catholic school and graduated from West Catholic HS in 1979. David lost a leg in a freak train accident at the age of 8. Despite this, he went on to become an elite athlete. He enjoyed dirt bike racing, golf, wheelchair tennis, and ultimately joining the wheelchair basketball team, the Grand Rapids Pacers. During his wheelchair basketball career, he was part of a team that won a national championship, a world championship, and was also part of three Olympic competitions that allowed him to travel to Australia, England and Brazil. David also had a passion for wheelchair racing. He competed in hundreds of races including the Grand Rapids River Bank Run for seven straight years. For 20 years David was part of the wheelchair sports camp at GVSU. He took great pride and joy from helping out the children at this camp. Most recently, Dave enjoyed fishing, hunting, camping and golf. Especially in Atlanta, Mi with family and close friends. Atlanta, home of the Krooner Cup golf tournament is where Dave used his famous foot wedge many times to secure many victories. Also, very skilled in cornhole, Dave captained many titles at the Lake Montcalm family gatherings. David owned and operated Advantage Installations, retiring with the skills to become “that fixit guy” more than willing to help anyone with his innate ability to repair anything. Or at least try. He applied these talents most notably at St Ladislaus aid society where he was voted in as president. During his tenure as El Presidente’ he was also honored by being named Grand Marshall of the 2019 Pulaski Days parade. Part of Dave’s legacy was petitioning the members to allow women to have the right to become a full member of the hall. Crazy idea, but groundbreaking. His hard work and dedication paid off two years later on Valentine’s Day 2017 when the first women were inducted. In January of 2018, Dave was diagnosed with stage 4 lung cancer. “I got this” became his mantra. He underwent many treatments with many successes along the way. The support provided by his brother, sisters, nieces and nephews was greatly appreciated. He loved the members of Laddies Hall and they along with so many friends and family gave him his will to fight (as the F-bomber himself would say) this f’ing disease. He never complained about struggles and did his best to maintain normalcy in his life by going about his daily business. Trying to get “a leg up” was his ultimate goal. Dave could not hide his affection for dogs as he and Lynda adopted numerous rescues over the years. Both were more than willing to dog sit for so many. All enjoying a place in his bed or spot on his couch to watch war documentaries or golf if any dog requested it. Most recently, Buddy, Bandit and Oliver lived fat and happy lives thanks to Dave’s love and Lynda’s home cooking. At one point, David asked God for His help. The guardian angel here on earth turned out to be his loving wife Lynda. She was his biggest fan and was there by his side to nurture and care for Dave even during the most difficult times. For that, the family is forever grateful. His attire spoke volumes. His Stormy Kromer cap, his flannel shirts, #22 Pacer’s jersey, numerous shirts about Dave, the man, the myth, the legend and his Everyone needs a Dave shirt summed it all up. That smile was genuine. He is already missed. Cremation has taken place. Due to Covid, a Celebration of life will be held at a later date at Laddies Hall. All will be welcomed. In Lieu of flowers, the family would like you to consider a memorial contribution to support St. Ladislaus Aid Society. 58 Lane St NW, Grand Rapids, MI 49504 or The Grand Rapids Pacers, c/o Christy VanHaver, Mary Free Bed Wheelchair and Adaptive Sports – Pacers. 235 Wealthy St. SE, Grand Rapids, MI 49503.

The family of Mr. David R. Kroon created this Life Tributes page to make it easy to share your memories.

Send flowers to the Kroon family.