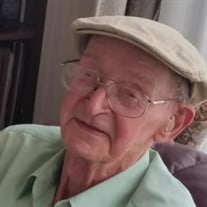 Clarence (Klaas) Van Steinvoorn, age 80, of Allendale went to be with his Lord and Savior on Wednesday, November 11, 2020. He is reunited with his beloved wife of 54 years, Nancy (Vander Wilk), who preceded him in death in 2017 and his newborn daughter, Julie Lynn in 1966. Born and raised in Tzummarum, Netherlands in the province of Friesland, Clarence and his family immigrated to the United States in April 1955. All of the family became US citizens on April 22, 1963, coincidentally occurring 3 days after he married Nancy. As a born-again Christian, he was passionate about his faith and found joy in signing religious hymns. His hobbies were raising chickens and running a garden stand in his front yard. He spent most of his time with his best friend, his dog Lady, who stayed by his side until the very end. Clarence has been blessed with 5 children, 9 grandchildren, 6 great grandchildren to date. His surviving children are Lori (Martin) Borgerding of Wayland, Deborah (Jon) Van Dyke of Roscommon, Carl Van Steinvoorn of Caledonia and Diane Boltze of Allendale. He is also survived by his siblings Helen Van Steinvoorn, Leo (Jean) Van Steinvoorn , Jack (Barb) Van Steinvoorn, Mary Peterson, Michael Vander Wilk, David (Kristie) Vander Wilk and Barbara Davis. Several nieces, nephews and cousins in the US and the Netherlands. Preceded in death by his siblings Alice Bruggink, Glenn Vander Wilk, and Sharon Vander Wilk. Special thanks for the love and care from the nurses at Heartland Hospice Care. Following COVID-19 precautions, limited family visitation is scheduled for Tuesday, November 17 at 12 noon with a service scheduled for 1pm at Walker United Reformed Church located at 1941 Randall Ave NW, Grand Rapids, MI 49534. Virtual attendance for the service is available at https://www.sermonaudio.com/solo/walkerurc/webcast/. A private interment service will be held at Allendale Township Cemetery following the service.

Clarence (Klaas) Van Steinvoorn, age 80, of Allendale went to be with his Lord and Savior on Wednesday, November 11, 2020. He is reunited with his beloved wife of 54 years, Nancy (Vander Wilk), who preceded him in death in 2017 and his newborn... View Obituary & Service Information

The family of Clarence (Klaas) Van Steinvoorn created this Life Tributes page to make it easy to share your memories.