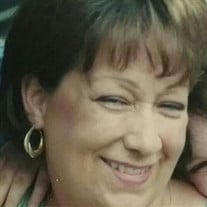 Cindy Stoffer (nee Bowlin), age 60, of Grand Rapids, Michigan, and formerly of Muskegon, Michigan, passed away unexpectedly on Wednesday, January 29, 2020. She was preceded in death by her daughter Leah, and her father, Donald Bowlin. Her parents-in law Jeremiah and Maureen Stoffer also predeceased Cindy. She is survived by her husband Mark Stoffer; her daughter Katherine “Katie”; her stepchildren, Jacob (Vanessa); Melissa Truskowski (Bret); and grandchildren, Wyatt and Allison; her sister, Christine Goudie (George); close friend, Denise Holmes; and many relatives and friends. Cindy was the daughter of Darlene Paquin, and stepdaughter of Robert (Jerry) Paquin, and Debra Bowlin. Cindy attended Reeths-Puffer High School in Muskegon, Michigan, and graduated in 1977. She also attended Muskegon Community College. She was a long time employee of Grand Rapids Public Schools. Cindy had a great love for the shores of Muskegon State Park. As a child, she spent many summer days there with her family, and returned many times to the State Park beach with her husband and children. Moved by the illness and death of her beloved daughter Leah in 2007, Cindy was a frequent participant in activities with Gilda’s Club in Grand Rapids. Family and friends will remember Cindy’s kind and peaceful presence and wry wit. She was, above all, devoted to her husband Mark and her children and stepchildren Leah, Katie, Missy, and Jacob. With sincere gratitude, the family wishes to remember Cindy’s coworkers: Matthew Berensford, Larry Johnson, and Larry Oberst who came to her aid and stayed with her at the time of her passing. The family will receive visitors Monday 6 to 8PM at the Arsulowicz Brothers Remembrance Chapel, 3525 Remembrance Rd NW. A Mass of Christian Burial will be held Tuesday 11AM at S.S. Peter & Paul Church, where she will repose one hour prior to Mass. Interment Rosedale Memorial Park. Memorial contributions may be made to Make-a-Wish Foundation or Gilda’s Club of Grand Rapids.

Cindy Stoffer (nee Bowlin), age 60, of Grand Rapids, Michigan, and formerly of Muskegon, Michigan, passed away unexpectedly on Wednesday, January 29, 2020. She was preceded in death by her daughter Leah, and her father, Donald Bowlin. Her parents-in... View Obituary & Service Information

The family of Cindy Lou Stoffer created this Life Tributes page to make it easy to share your memories.

Send flowers to the Stoffer family.