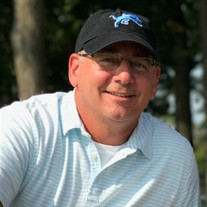 This is what we are made of: the sum of our emotional parts. The question “Who are we?” doesn’t matter. What we are to the people around us, that is what matters. Christopher Michael Kirkbride, who died peacefully Monday after more than two years battling brain cancer, leaves behind countless people whose lives he touched — family, friends, co-workers and strangers. This is what made Chris who he was in life: Chris was his wife’s husband. He was devoted and utterly in love with his wife, Amy Kirkbride (Brandstatter). He was a supportive spouse during their 20 year marriage; a partner in parenting. Chris and Amy met at their 15 year class reunion, having never talked during high school. Amy was talking to a mutual friend at the event and after she left, Chris asked the friend for Amy’s phone number so he could invite her out on a date. They loved to spend time together at their cottage at Hardy Oaks near Newaygo, boating and sitting by the fire sharing stories with friends there. They enjoyed downhill skiing and traveling together. The couple found comfort in each other’s company. Chris was his sons’ father. He loved his sons, Alex and John Kirkbride, who shared many of their father’s qualities. Chris was an incredible football player at West Catholic High School and was part of the All-West 50th Anniversary Team. He was a fearsome cornerback for some of the Falcons’ best teams in the 1980s. Chris was a master at figuring things out and could fix just about anything that was put in front of him. He was quietly thoughtful. When a political discussion turned heated, he would quietly listen and not add much. But what did come out of his mouth was usually profound and oftentimes correct. He never argued points to make himself look good or to demean others, only to add to the knowledge at the table and explain himself or his point. Chris was his daughters’ father. Like his daughters, Cassie and Claire Kirkbride (and his granddaughter, Izzy), he was fun loving, curious and surprisingly adventurous. He was proud of his girls and spent many days with them enjoying family vacations and time at the cottage. Chris was his father’s son. Like his father, Harold R. Kirkbride, who proceeded him in death, Chris was fiercely proud of his family. He had a special relationship with his dad. They both loved the cottage and the extended family there. They shared motorcycle and snowmobile adventures and boating in Michigan and Florida. He also inherited his father’s ability to fix most anything, whether it be mechanical or in his business career at Meijer as a buyer and most recently with his coworkers at Hudsonville Ice Cream. Chris helped people without question or complaint. He also enjoyed spending time with his stepfather, Doug McKay, a highlight being a trip to London to see the Detroit Lions play at Wembley Stadium. Chris was his mother’s son. He inherited his big heart from his mother, Sue McKay, a heart with an abundance of love, caring and empathy. Like his mom, Chris worried about others, putting others’ needs before his own. He was also blessed with her handsomeness. Chris was also blessed to have a stepmother, Bonnie Kirkbride. They shared great times together in Florida and the cottage. Chris was his sister’s brother. Chris and his sister, Heather Kubiak, were different but complimentary. They helped fill in each other’s weaknesses. Heather shows Chris how emotion can help the world; Chris helps Heather understand how temperance can prevent YB misunderstandings and hurt feelings. Chris is also survived by his stepsisters, Kim Tuthill and Jennifer McKay. Chris was his brother’s brother. Chris was Rob Kirkbride’s best friend. He was also his role model and someone to look up to and emulate in every way. He was blessed to have an extended brotherhood as well. He enjoyed the family football games after Thanksgiving with his stepbrothers, Sean, Kevin, Brian, Doug and Jeff McKay and hanging out on the dock with Kirk Thielke. Most importantly, he is his Holy Father’s son. Chris remained steadfast in his faith despite the frustration that goes with constantly fighting a fatal disease. He was a beacon who guided others to their own faith by living and loving the way Christ taught us. When he was diagnosed with Grade 4 glioblastoma, he turned to his faith and found comfort during several visits with his family to the Blessed Solanus Casey Center in Detroit. Chris was attracted to Blessed Solanus Casey’s simple life of faith and service to others. He also found comfort in his brain cancer support group at Gilda’s Club Grand Rapids. Chris was also a friend to many. He will be sorely missed by his extended cottage family, where he served as the unofficial handyman and pitcher in baseball games that pitted the kids against the adults on holiday weekends. Strikeouts were eliminated when Chris was on the mound; kids swung until they got a hit. He loved his nieces and nephews and family gatherings, which were usually held at Chris and Amy’s home were truly that — a time for all the family to gather. Chris will also be missed by his Hudsonville Ice Cream coworkers, who never wavered in their support for him. He loved his job and giving tours to family members and friends, which always ended with a scoop of ice cream. The Memorial Mass will be celebrated Friday August 14, 2020 at 11:00 AM at St. Anthony of Padua Church 2510 Richmond NW (Due to Covid 19 limited seating may be available at the church). The family will receive visitors Thursday August 13, 2020 from 2:00 to 4:00 and 7:00 to 9:00 PM at the Arsulowicz Brothers Remembrance Mortuary, 3525 Remembrance Rd NW and Friday morning one hour before the Mass at the church. Contributions can be made to Gilda’s Club Grand Rapids, 1806 Bridge St NW, Grand Rapids, MI 49504 gildasclubgr.org and the Blessed Solanus Casey Center, 1780 Mt Elliott St, Detroit, MI 48207 www.solanuscenter.org

This is what we are made of: the sum of our emotional parts. The question &#8220;Who are we?&#8221; doesn&#8217;t matter. What we are to the people around us, that is what matters. Christopher Michael Kirkbride, who died peacefully Monday after... View Obituary & Service Information

The family of Mr. Christopher M. Kirkbride created this Life Tributes page to make it easy to share your memories.

This is what we are made of: the sum of our emotional parts....

Send flowers to the Kirkbride family.