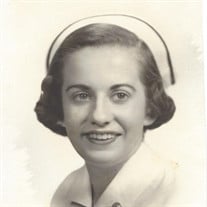 Mrs. Christine Grace Wolodzko (Brennan) age 87 of Grand Rapids went to be with the Lord on Tuesday September 29, 2020. Christine was born the fourth of seven children to Hubert and Eleanor Brennan. Her brothers and sisters are William Brennan, John Brennan, Ann MacLachlan, Hubert Brennan, Martin Brennan and Katherine McLeod. Christine was preceded in death by her parents Hubert and Eleanor Brennan, and her brother Martin Brennan. Christine graduated from Our Lady of Mercy High School in Farmington, Michigan where her favorite subject was Latin! And did she love Latin! She went on to get a Master’s Degree in Latin in her 40s, and even up until her late 70s she could be found translating Virgil every week on various Latin list-servs. Her hero was Julius Caesar, because of his unparallelled skills as a leader and commander. She was fond of recounting how he built a bridge over the Rhine River, then immediately tore it down, just to show the German barbarian tribes that they were never out of his reach. For many years Christine lived in Detroit, near her parents, two sisters and their children. So many of Christine’s social events centered around siblings, cousins, second cousins, and relatives in New York and New Jersey. There was never a dull moment when the Brennans got together! From this close family relationship, her children and nieces and nephews developed close friendships themselves, which one cousin has termed “cousinology.” Christine went on to get a bachelor’s degree in nursing, then in 1968 obtained a Masters Degree in nursing (yes, she had two Master’s degrees). She taught medical-surgical nursing for many years at Highland Park Community College where several days a week she was out of the house at 6:00 a.m. to lead her students in their clinical rounds. Once she retired, Christine moved to Grand Rapids, where she lived just around the corner from her daughter. She was able to regularly visit her beloved family members, sister Ann, and nieces and nephews. And they regularly visited her as well! There were a lot of parties at Aunt Christine’s house! And when the Brennans get together, it’s always a party! Christine was adventurous and fearless. Once she retired, she began traveling, sometimes on her own, or with her sisters Ann and Kate or with various tour groups. She traveled to Russia, China, Egypt, Europe, Spain, Mexico, Greece and Turkey. Christine was a very generous and thoughtful mother, grandmother and aunt. She displayed remarkable generosity to many, many people, and did so effortlessly. If she saw that one of her family members had a need, she tried to meet it. She was charitable to the poor and forgotten. She loved and very strongly believed in education, especially the classics. Above all, she loved God, the Catholic Church, and her family. Nearly every day for years, when she was not doing her clinical rounds, she attended 6:00 a.m. Mass at Gesu Parish in Detroit. For the last three years, Christine lived at St. Ann’s Home for the Aged in Grand Rapids. Again, she was constantly visited by devoted nieces, nephews, family members and friends, who will always remember her candid sayings and advice! She was very well loved and will be terribly missed. Christine is survived by: her children Mary (James) Owens and Louis (Flora) Wolodzko; her grandchildren Natalie Wolodzko, Matthew Owens and Stephen Owens; siblings William (Lisa) Brennan, John Brennan, Anne MacLachlan, Hubert F. Brennan Jr., Katherine McLeod; sister in law Ellen Brennan; nieces and nephews. The Mass of Christian burial will be celebrated Thursday October 8 at 10:00 AM at St. Anthony Church where her family will receive visitors one hour before the Mass. (Masks and social distancing are appreciated) Interment Holy Cross Cemetery. The family will receive visitors Wednesday October 7 from 4:00 to 7:00 PM at the Arsulowicz Brothers Remembrance Mortuary, 3525 Remembrance Rd NW. Memorial contributions to St. Ann’s will be appreciated.

Mrs. Christine Grace Wolodzko (Brennan) age 87 of Grand Rapids went to be with the Lord on Tuesday September 29, 2020. Christine was born the fourth of seven children to Hubert and Eleanor Brennan. Her brothers and sisters are William Brennan,... View Obituary & Service Information

The family of Mrs. Christine Grace Wolodzko (Brennan) created this Life Tributes page to make it easy to share your memories.