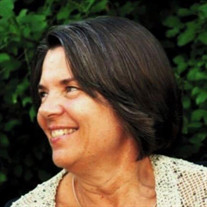 Cathy Ann Schmitt (Ziebarth), age 66 of Comstock Park, MI joined her husband Joseph Christian Schmitt III in heaven on December 27, 2021. Cathy was affectionately nicknamed “Ceez” by Joe. In the heat of the summer, July 30 1955, Cathy was born and adopted by Richard Fredrick Rericha and Dolores “Dana” Ziebarth of Rockford, Michigan. After Richard’s passing, Dana married Charles William Ziebarth who adopted Cathy in 1960. Cathy graduated from Rockford high school in 1973. After high school Cathy pursued a philosophy degree from Grand Valley State University there she met her husband Joe and they married in 1979. After college Cathy completed cosmetology school, while home with her children, her kitchen was her salon. In the early 1990’s Cathy began a rewarding and successful career in Real Estate with Coldwell Banker and served the Grand Blanc, MI community until her retirement in 2010. Cathy and Joe moved to Grand Rapids, MI in 2010 where Cathy volunteered her time at the Grand Rapids Public Library helping others with researching their own ancestry. Those missing her most dearly are her children; Melisa (Kurtis) Nance, Rhiannon (Steve) McCalmont, Dr Joseph (Lauren) Schmitt IV, James (Tonja) Schmitt and John Schmitt; her grandchildren Keegan and Ella McCalmont, Madison (Maddi) Nance and Sofia Schmitt. Her siblings; Tracy Asah, David (Rebecca) Ziebarth, Julie Schmitt, Rick (Joni) Schmitt, James (Jan) Schmitt, John (Deborah) Schmitt, Greg Tornga, Susan (Dennis) Dunning, Micki (Roger) Ackerman; Many nieces, nephews, cousins, neighbors, and friends. Cathy joins her father Richard Fredrick Rericha, mother Dolores “Dana” Zeibarth, her father Charles Ziebarth, her mother in law Virginia “Ginny” Schmitt and father in law Joseph Christian Schmitt II as well as sister in law Mary Tornga in heaven. Cathy adored her husband Joe and often enjoyed the gorgeous Michigan sunsets with him at the Grand Haven Pier. Together they always provided a space for many, Joe would cook and Cathy provided counsel. Many have said they are better for knowing Joe and Cathy. Other interests of Cathy’s were laughter and grand stories. She had a passion for health and wellness, she thrived on research, specifically related to ancestry and lineage. Above all Cathy loved God. She confessed Jesus Christ as her Lord and Savior in July of 1986. From that time on she became passionate about the word of God and the power of prayer. If there was something worth fighting for, she was praying. Cathy could be found, at the end of a long day, in her closet, with her prayer journal communing with the Lord. Cathy was a long time member of Mount Hope Church in Grand Blanc, MI. Cathy wished to have a private family gathering to remember her. We ask that you consider taking this time to reach out to a loved one and connect with them. Tell those you care about, that you love them. In lieu of flowers, Memorial donations can be given to: David’s House Ministries 2251 Hope Grave Ave SW Wyoming, MI 49509

The family of Cathy Ann Schmitt (Ziebarth) created this Life Tributes page to make it easy to share your memories.