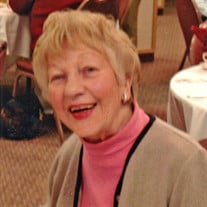 Adeline Rzonca passed away on March 21, 2021 in Lawton, MI at White Oaks Assisted Living. Born August 13, 1920 in Grand Rapids, MI, she was the youngest of ten children born to Anthony Stanley Milanowski and Victoria Leocadia Kokocinski. As a child, Adeline lived with her family on the NE corner of Veto and Indiana. In school, she enjoyed her studies and school activities. She was a cheerleader. She especially enjoyed playing in Richmond Park and going to the movie theater near home. In high school, Adeline followed her dream to be a secretary by learning typing and shorthand. As the country geared up for WWII, she was offered a position as a secretary with the Defense Department n Detroit. In 1941, at the age of 21, never having lived away from home, she moved to Detroit. She obtained lodging at Priscilla Inn, a women’s boarding house, but she had to sleep in the hall until a room was available. She met this handsome guy, Ted, at work and they went on a double date. A friendship developed and Adeline was united in marriage to Thaddeus Casimier Rzonca on February 19, 1944. The wedding took place at the Basilica of St. Adalbert in Grand Rapids, MI. Ted and Adeline settled in Detroit and raised their two sons. When the boys were high school age, Adeline went back to work as a secretary at the US Army Tank Automotive Command in Warren, MI. She worked there for 15 years. After retiring in 1980, Ad and Ted moved to Croton, MI and built a house on the Muskegon River near her sister, Connie, and her husband, Ed Budnik. There were many happy memories of their few short years in Croton – Boating and fishing on the pond, dancing and dining with friends. Ted passed away in 1986. A few years later, Adeline moved to a condo in her beloved home town of Grand Rapids. There she was able to spend more time with her sister, Marie. At 92, Adeline moved to Lawton, MI, to be near to her son, Roger. Adeline enjoyed many sports in her younger years, including tennis, swimming, bike riding, ice skating and sledding. She and her sister, Connie, enjoyed hunting mushrooms. Adeline is survived by her sons, Roger (Teresa) Rzonca of Paw Paw, MI, and Michael (Brenda) Rzonca of Poulsbo, WA; grandsons Isaac and Matthew; and many nieces and nephews.

The family of Adeline L. Rzonca (Milanowski created this Life Tributes page to make it easy to share your memories.